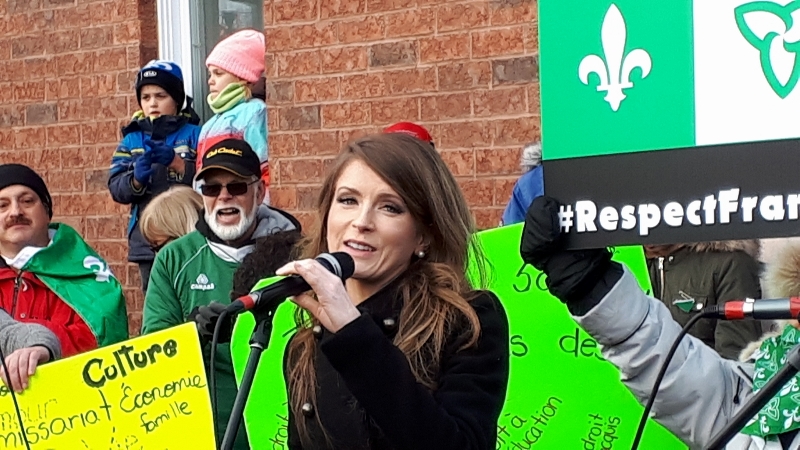 The MPP for Glengarry-Prescott and Russell was not satisfied with the answer she got in the legislature on March 18 from the Minister of Energy, Northern Development and Mines about the status of the Eastern Fields wind power project in La Nation.

Amanda Simard asked Greg Rickford if the Eastern Fields project has really been cancelled when the Ford government ended renewable energy contracts in July 2018, soon after it took office.  The Green Energy Act was repealed in December 2018, but the Ontario Energy Board (OEB) still granted a generation permit to Renewable Energy Systems (RES), the company developing Eastern Fields.

“Can the minister please tell us if the Eastern Fields wind power project is on or off?” Simard asked.

In a video clip of that day’s Question Period, provided by Simard, Rickford responded by outlining the government’s efforts to change the leadership of Hydro One and how the renewable projects that were cancelled were causing high power rates, were unwanted by municipalities, and not needed by the electrical grid.

Simard countered with a supplementary question.

“Did the government cancel the project like it said it did, yes or no?” she asked.

Rickford answered with a defence of the government’s record so far on efforts to reduce power rates for consumers.

Simard notified the legislative clerk’s office of her dissatisfaction with Rickford’s answer and a notice was issued stating the status of Eastern Fields would be again questioned by Simard on March 19.

Last week in The Review, representatives of RES, the OEB, and the Ministry of Energy, Northern Development and Mines stated that Eastern Fields is on hold due to there being no valid contract for the project and that the generation licence which was issued by the OEB does not mean the project can go ahead.

This week started off with a verbal disagreement between Simard and former Prime Minister Brian Mulroney.

On Sunday, Mulroney was a guest on the popular Radio-Canada TV current affairs show Tout le monde en parle and defended the role and record of his daughter Caroline, who is Ontario’s Attorney General and Minister of Francophone Affairs.

Simard left the Ontario PC caucus in December 2018 in disagreement with Premier Doug Ford’s plans to cut French-language services, including funding for a proposed French-language university.

Mulroney referred to the MPP as a “p’tite fille” or “little girl” on the program while defending his daughter’s role as Francophone Affairs Minister.

“Mr. Mulroney tried to defend his daughter who completely dropped Franco-Ontarians.  He did great things for Canada, but his words belong to another era and have no place in a respectful and egalitarian society,” Simard stated.

The former prime minister issued an apology on Monday afternoon and said he meant to use the expression for “young woman” instead of “little girl” and did not intend to insult anyone with his poor choice of words.