What is so special about St. Bernard’s Church in Fournier? A lot of things, according to parishioners. 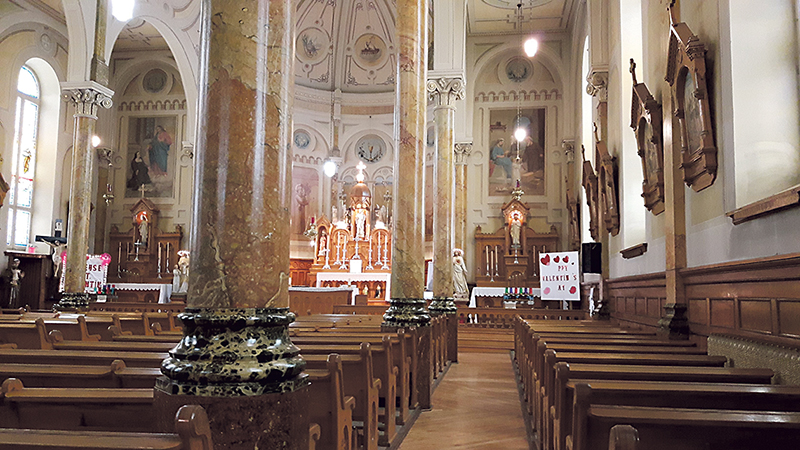 St. Bernard’s Church in Fournier is under threat of closure, while parishioners work to come up with a plan to save their church, which they say has heritage qualities that should be preserved for future generations.

You may have read about the parishioners of St. Bernard’s 150-year-old church in Fournier and their efforts to have the municipality apply to the province for a heritage designation. You may also have read about them staving off the Roman Catholic Diocese’s plans to close the church – news which it received while it was in the midst of 150th anniversary celebrations.

The parish now has about five years to come up with a plan — and that was sort of a trade-off agreed to by the diocese, which pressured the municipality to take the heritage designation off the table in exchange for the five-year extension.

In the meantime, in neighbouring St-Isidore, plans are underway to construct a new church, after that church, built in 1879, burned down a few years ago. Planning for that new building is underway and the new structure will include a parish hall, as well as office space for the priest. Seating in the church will be reduced to 160 seats, compared to the 400 seats available in the 1879 building.  The cost is estimated at $3.5 million.

The Nation Mayor François St-Amour said the hall will not be a rental space. The municipality is discussing the formation of a heritage committee. What form that will take and what mandate the committee will have has yet to be decided, he says.

Nation Municipality Councillor Marie-Noëlle Lanthier says that the municipality is moving closer to getting its heritage committee off the ground and recently received a kind of tool kit from the province to help citizens get organized. A Facebook page was created to share historical photos and residents have been asked to email Josée Brizard, the municipal clerk ([email protected]) to indicate that they are interested in being involved. Now that budget deliberations are over, she hopes to get something moving within the next few weeks.

Lanthier says that the recent threat of closure of St. Bernard’s seems to have inspired people to find out about the church and the art and design of the building itself.

There were about 30 people at a recent presentation, she says and a previous presentation for parishioners only was likewise well-attended.

An inventory of what is of historical value in the municipality is very much needed, she said, mentioning villages that no longer exist, like Gagnonville and Grant, and the agricultural practices (the hop growing, for example) the crosses located along rural roads and other points of interest, like Caledonia Springs and even the St-Albert Cheese business, which celebrates its 125th anniversary this year.

One historic church, one new one?

It would be easy to wonder by the diocese would close down one church, with its original stained-glass windows and beautiful artwork inside, to build a new one a few miles away. In this age of declining church attendance, it would seem to make sense to combine the parishes.

But it does not look like that will ever happen.

The politics of where people attend church isn’t what the parishioners at St. Bernard’s Church are worried about. They believe the heritage elements of their church make it unique and they want the building saved and protected.

But it’s an uphill battle. Several parishioners haven expanded their knowledge of the church to highlight what makes it unique.

Be prepared for a walk through the history of church-building in early Canada.

Parishioner Michel-André Lavergne is one of the church’s staunchest defenders. He hopes that people will support the historic church because of historic value alone, even if they do not live in the region and even if they are not Roman Catholic.

“We give to causes all the time and even to things which many of us will never see. We support the Amazon Forest because we believe in it,” says Lavergne.

Lavergne was joined by Murielle Bourgon and Leslie Howard recently to give The Review a tour of the church.

Lavergne pointed out features and facts that few of us consider. One interesting fact is that the church is built in such a way that the light from the east and the west floods the stained-glass windows. But it may not have been just about the art of the windows. Lavergne reminds everyone that there was no electricity at the time the church was built, so the best lighting would have been available if the church was built in a north-south orientation.

Lavergne believes that much of the church’s inherest beauty lies in its modest proportions. As he describes it, it is grand, but not grand. He knows the measurements of the building’s interior and even how far apart the windows are. One can tell he is in awe of the perfect proportions.

Beyond the numbers, there is the social context of when the church was built and Lavergne believes that nothing happened by chance.

The stained-glass windows, created by Henri Perdriau, with the help of John Patrick O’Shea, depict 12 apostles and four evangelists. There are 16 windows, each containing an image and these, he says, also have their own order, with the most revered figures depicted in the windows closer to the front of the church. Even the dominant colours of red and blue, he says, stand for the blood of the Martyrs and blue — for the Virgin Mary. 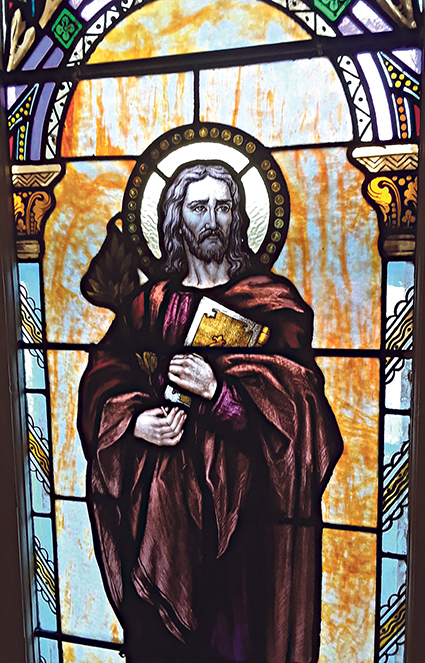 The parish invited the public to attend a presentation on the history of St. Bernard’s Church on February 20 at The Nation Municipality, to outline, for example, the story behind each of the stained-glass windows. The visage on this one bears a remarkable resemble to the face Christians have come to know as that of Jesus Christ.

“There is so much meaning here,” Lavergne says, describing the importance of the figures who were placed on the right and on the left side of the church. He points to the woodwork, which he says represents a fence, or a kind of fortification around the perimeter.

The three temple-like structures in the nave of the church are themselves modest fortifications, with their woodwork resembling the ramparts of a castle.

As he describes a more recently-made altar, when the church decreed that the high pulpit should be removed from the church, Lavergne says, “This was made by the hands of someone from this place.”

You might overlook the beautiful trompe l’oeil paintings at first glance. But what appears to be endless amounts of mouldings on the church ceiling and walls is really just: good artistry to fool the eye of the beholder.

Édouard Meloche and Toussaint-Xénophon (T.-X.) Renaud took care to paint the walls and have the light reflect as it should — as if there were a glow of light coming from the rear of the church. The pillars in the church are likewise not what they appear to be — they are not made of marble, but are rather, faux-painted to look like marble.

As if the artistry itself were not enough, Lavergne points out that all of what we are looking at is original — the painting has never been re-done or changed.

Lavergne has researched so much that it is impossible to share it all here. He knows about each figure in each stained-glass window and the significance of what each is wearing, right down to the colour and type of robes and whether or not they are wearing sandals or are barefoot.

All churches have the guidelines and stories in their art, but they seem to be more readily apparent in St. Bernard’s Church, says Lavergne.

“We want to keep it up as a church and a building, but that is not what faith is all about,” Lavergne said, mentioning some of the changes which came about as a result of the Second Vatican. 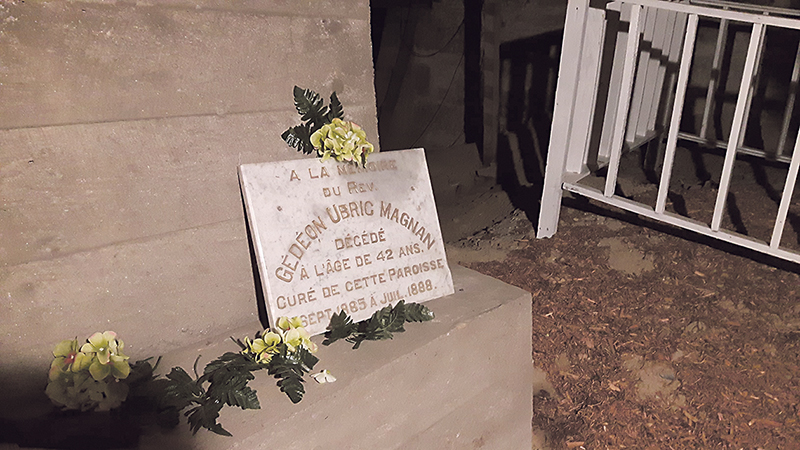 We toured a small chapel, located beyond the altar area and then, visited the basement, where the tomb of a former parish priest, Gédéon Ubric Magnan, is located. Magnan was the Curé of the parish from 1885 to 1888 and died at the age of 42. 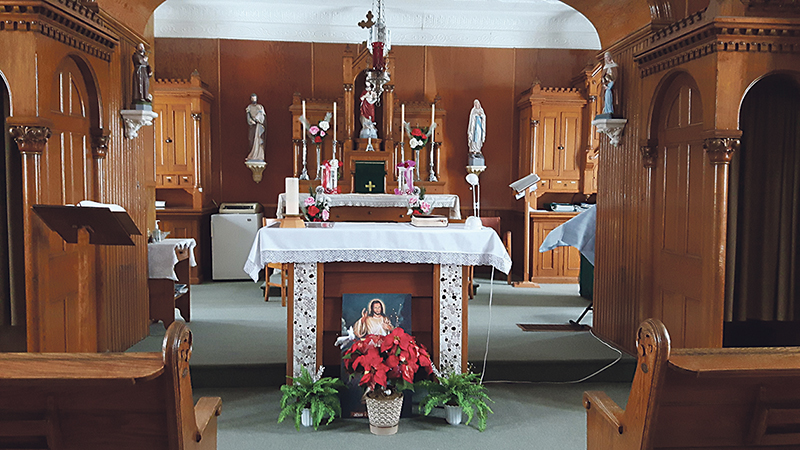 This chapel, located beyond the altar and nave inside St. Bernard’s Church, has beautiful wood features that carry on the theme of the woodwork inside the church.

It feels as if the vast order of everything in the building is a story that comes from the past. And the “ramparts”, as described by Lavergne, belong to the logic that, “This building has everything it needs to defend itself.”

Perhaps, but a few people who care deeply about protecting heritage, are also needed on this voyage.