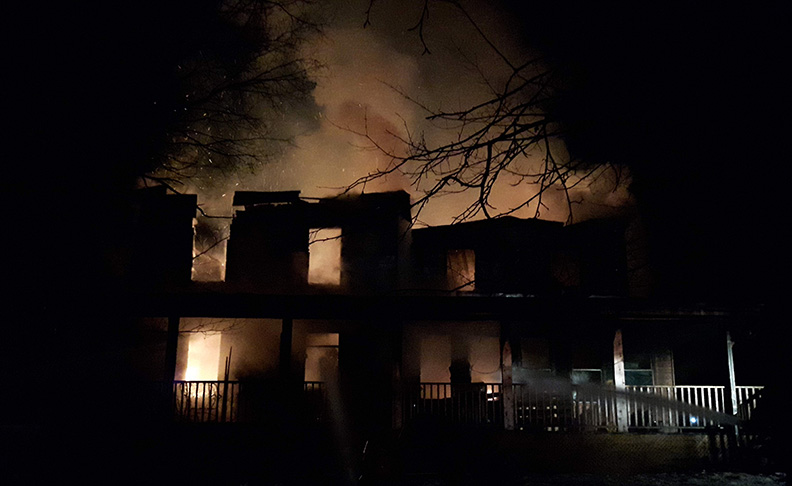 A house at 1350 Aberdeen Road West, located south of Vankleek Hill, was completely destroyed by fire on Friday evening. No one was in the house at the time the fire broke out and there were no injuries resulting from the fire. The cause of the blaze remains unknown and there will be no investigation, says Vankleek  Hill Fire Chief Michel Martin.

When firefighters arrived on the scene, Martin says they tried to extinguish the fire, which was located in the attic of the house, but the fire itself was mostly inaccessible, due to it being inside the home, kind of between two roofs, he said.

The fire overtook the home within a few hours. 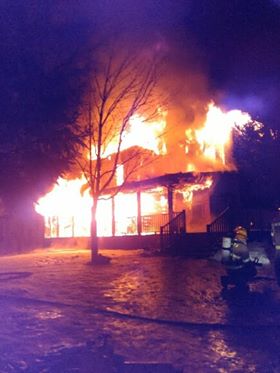 Martin said he immediately put the water shuttle protocol into place, calling in water tankers from L’Orignal, The Nation, East Hawkesbury and Alfred-Plantagenet. Water was trucked from a hydrant at the southern edge of Vankleek Hill and dumped into a reservoir which had been set up on Aberdeen Road.

Soon, additional firefighters were on the scene from several fire departments, including about 14 from L’Orignal, four from The Nation Municipality, eight from East Hawkesbury and 10 from Alfred-Plantagenet to supplement the 18 firefighters from the Vankleek Hill Volunteer fire department.

Martin said that 51 firefighters in all were called out to fight the persistent blaze. Firefighters received the fire call at about 4:30 p.m. Friday evening, January 4.

From the outset, firefighters were fighting the fire in a defensive manner, Martin said, adding that he did not send any firefighters inside the house. He said everyone was shooting water into the fire, with the exception of a foam combination used at the beginning but that did not prove effective.

The firefighting conditions were good, said Martin. There was no wind that evening and it was not cold. Extremely low temperatures are hard on firefighters, and equipment can also freeze up during low temperatures.

Assistance has been offered to some of the residents of the home by the Community Assistance Fund Enterprise, which operates the CAFE (Vankleek Hill’s thrift shop) and the Vankleek Hill Food Bank.