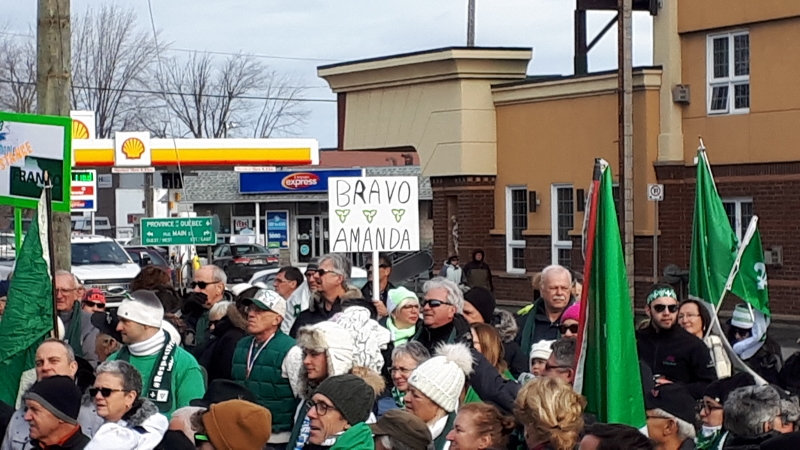 « NOUS SOMMES! NOUS SERONS! » (We are! We will be!), « NOTRE SERVICES, NOTRE EDUCATION, NOTRE PLACE! » (Our services, our education, our place!) were some of the slogans repeated over and over when hundreds of people demonstrated on Saturday in Hawkesbury for the protection of language rights and government services for Franco-Ontarians.

The demonstration was part of a larger province-wide day of action against proposed cuts to French-language services and programming by Premier Doug Ford’s government.

The most controversial elements of the cuts are the cancellation of a French-language public university and the elimination of the Office of the Commissioner of French-Language Services.

The Premier has since said the Commissioner of French-Language Services will remain, but within the Office of the Ombudsman.

The Hawkesbury demonstration was held outside the constituency office of Glengarry-Prescott-Russell MPP Amanda Simard.

Normally, people protest outside constituency offices because they are angry with their MPP. That was not the case at this event. The crowd was overwhelmingly supportive of Simard, who recently left the Progressive Conservative (PC) caucus as a statement of her disagreement with the government’s plans.

The crowd grew larger and larger until traffic on McGill Street crawled past. The noise grew louder and louder with the many noisemakers, cheering, and vehicle horns from supportive drivers.

The program was led by Éric Marcotte and Nathalie Ladouceur. They introduced speakers and entertainers who defended French-language rights and identity, and kept the crowd energized.

Jean Poirier, who served as the Liberal MPP for the former riding of Prescott and Russell from 1984 to 1995, said “It’s incomprehensible in 2018!” that Franco-Ontarians should have to protest to maintain their language rights.

Poirier said ensuring Franco-Ontarians have access to public services in French is a “perpetual fight.”

The former MPP said the current situation is reminiscent of the struggle in the 1960s to bring back French-language schools in Ontario.

French schools had been restricted to grades one and two only when Regulation 17 was introduced by Premier Sir James Whitney’s Conservative government in 1912.  The regulation was later repealed but no French-only schools existed again until 1968.

The memory of Regulation 17 was present for many in the Hawkesbury crowd.

Gerald Côté of Valleyfield was carrying a homemade sign that called Premier Ford an Orangiste, in reference to the anti-French, anti-Catholic Orange Lodge that held influence over the Ontario Conservatives in 1912 in getting the regulation passed.

An intriguing speaker who briefly held the mic in Hawkesbury was Muhammad Musa of Toronto. He moved to Canada from Pakistan in 1999 and said he was greatly moved by the situation facing Franco-Ontarians and is very sympathetic to MPP Amanda Simard.

The unilingual Musa said, “Today I learned my first sentence in French,” to the crowd.

Musa said he supports the cause because he believes in the “beauty of multiculturalism” in Canadian society.

Glengarry-Prescott-Russell Member of Parliament, Francis Drouin, who has strongly denounced Ford’s cuts in the House of Commons, told the crowd to make lots of noise because people in Toronto need to hear it.

Drouin also referred to past struggles involving Regulation 17 and when the Mike Harris government tried to close the French-language Montfort Hospital in Ottawa during the 1990s.

Amanda Simard appeared on stage after Drouin and she was given a rock star’s reception.

Simard said she was amazed by the energy in the crowd and appreciates the support from Franco-Ontarian communities, but also from Francophones across Canada, and from anglophones as well.

“We’re stronger than ever,” said Simard.

“I’m still a conservative,” she told reporters after the rally.

Simard explained that she is now freer to use her own conscience when voting in the legislature and do what her constituents elected her to do.

So far, the only role Simard has had to relinquish was that of Parliamentary Secretary to the Minister Responsible for Francophone Affairs, (Attorney General Caroline Mulroney). Simard is also a member of the Legislative Assembly Committee and said that so far, her role has not been revoked and that independent MPP’s can sit on one committee.

She maintained that her relationships with members of the PC caucus and other parties is good and that she can still get things done for the riding.

Overwhelmed by the support she has received, Simard said she feels more energy than ever, even though she hasn’t slept well during the two weeks since the cuts were announced.