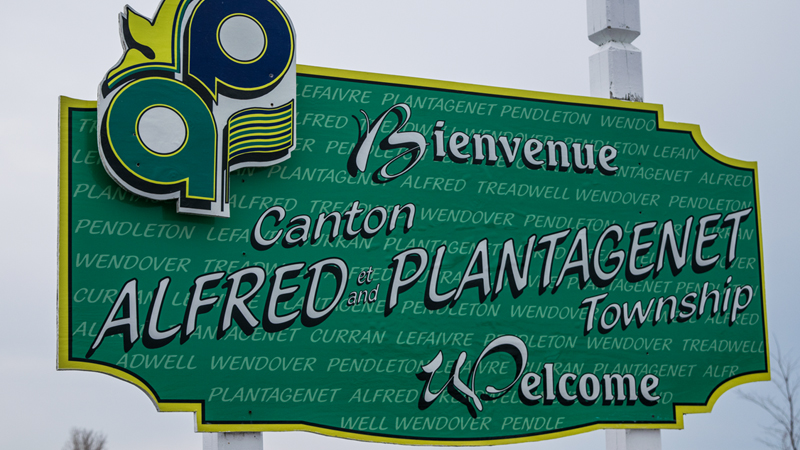 One thing is for sure in Alfred-Plantagenet’s municipal election.  The township will have a new mayor on October 22.  Fernand Dicaire, who has served as mayor since 2014, is not seeking another term.  Dicaire said he only promised to serve one term if he was elected during the 2014 campaign.  Having retired from a career as a consulting engineer in 2011, he said, “I think I deserve to take a break.”  Dicaire was a registered candidate for mayor on the afternoon of Thursday, July 26, but hinted at that time things could change before the 2 pm registration deadline on Friday, July 27.  As of Monday, his name was not on the list of certified candidates.

Dicaire highlighted several achievements in Alfred-Plantagenet during the past four years.  He mentioned the township’s purchase of the former school in Lefaivre for use as a community centre, and the new Wendover splash pad.  He also mentioned the new municipal building which opened earlier this year and is double the size of the old facility.  Dicaire said repairs were also made to the Alfred fire hall, the community centre in Plantagenet, and the Wendover library was relocated.

The outgoing mayor said the municipality has 285 kilometres of roads it is responsible for and that during the past four years, council has been funding road improvements beyond the required amounts to catch up with repair needs.

“It’s been a hectic council over the past four years,” said Dicaire, and he hoped that other members of council will be proud of their accomplishments.

Two candidates are running to be Alfred-Plantagenet’s next mayor.  Jean-Pierre Cadieux, a current member of council, has been in municipal politics on and off for 16 years, including serving two terms as deputy mayor.  He said he wants to ensure satisfaction and a high quality of life for residents.  However, he did not want to go into detail about exactly what he would do to help achieve that goal out of concerns of making “false promises” and causing concerns that his plans would cost too much money.  He said he would like to make stronger efforts to get funding for projects from the provincial and federal governments.  Despite his reservations about revealing his ideas, Cadieux did admit he would like to see natural gas service expanded to the areas of the municipality that are not served currently and for improvements to be made to high-speed internet access in the rural areas.

Beautification of parks and greenspaces is another initiative that Cadieux said “wouldn’t cost much,” and he would like to see how the municipality could develop other sources of revenue, noting he would “run the place tight but light,” if he’s elected.

Stéphane Sarrazin is a newcomer to municipal politics.  He has served as President of Hydro 2000, the municipal electrical utility, since 2014.  Sarrazin said he got interested in council’s activities due to his role with the power utility and has attended council meetings as an observer for the past three years.  He said improvements are needed to township’s relationship with the county and provincial governments to better secure financial support for projects.  “We could get more” he said and explained the “proper person” is needed to negotiate with other levels of government.

Sarrazin is a life-long resident of Alfred.  His past community involvement includes serving as President of the Alfred Optimist Club and on the school parent council.  He also recently started a municipal politics Facebook group called Parlons Politiques Alfred-Plantagenet (Talking Politics Alfred-Plantagenet).

In addition to the two mayoral candidates, incumbent Councillor René Beaulne is seeking re-election in Ward 1.  The other candidates in that ward are; Suzanne Lafrance, Yves Laviolette, and André “Barber” Péladeau.  In Ward 2, incumbent Councillors Jean-Claude Delorme and Chantal Galipeau are running again.  Jeanne Doucet, Lynda Lemieux, Dominique Perrier, Antoni Viau, and Ian Walker are the other candidates in Ward 2.