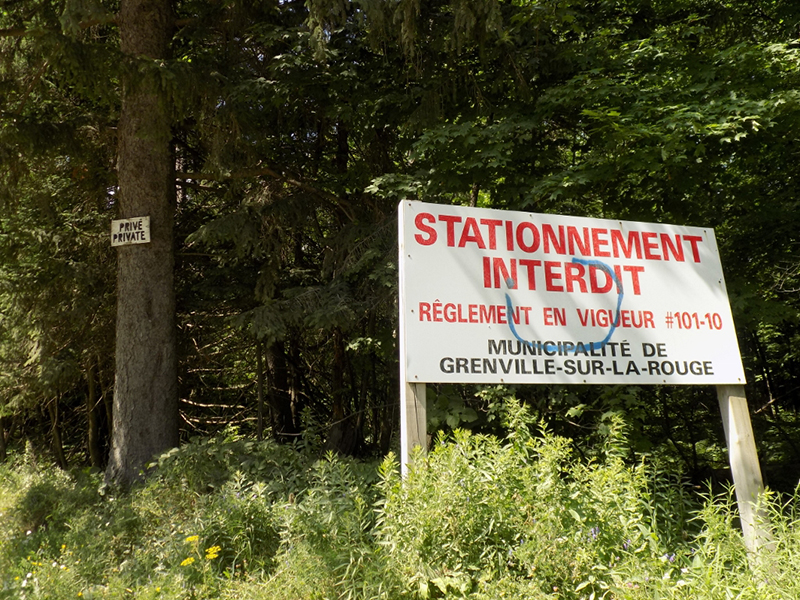 This photo dates back to 2018, when the municipality warned people about illegal parking.

Two recent emergencies, and the popularity of Rouge River as a recreation destination are casting a spotlight on problems involving access to the river.

Last week, 38 year-old Olivier Chouinard went missing near the river on l’Annonciation Nord.  The Sûreté du Québec (SQ) began searching and said there was good reason to fear for his safety.  During Canada Day weekend, a 17-year-old male was swept into the Rouge near Huberdeau and drowned.

Camping, traffic, parking, and garbage, are some of the challenges.  In Grenville-sur-la-Rouge, there are proper campgrounds and access points.  Municipal Director General Marc Beaulieu said Grenville-sur-la Rouge hoped the issues of parking and trespassing along Rivière Rouge would become less of a problem when the park was opened at Chutes-des-sept-soeurs on Route 148.  It costs $5 per vehicle to enter that site for the day, which includes ample parking.  The park also has 20 campsites.  Private rafting companies also have access points and campsites for their customers.  But, many visitors still seem to prefer enjoying the river at more remote, unofficial locations.  One area of concern is two islands in the river along Chemin de la Rivière Rouge.  During the past weekend, a family with a large tent was camping on one of the islands and their cars were parked along the road next to the narrow channel separating the island from the mainland.

According to one resident, floating water toys, garbage, returnable bottles or cans, and liquor bottles are left behind.  Last weekend, a small fortune in empties and the occasional discarded air mattress were spotted.  Residents say the gravel road, which often borders the river with no guard rails is often reduced to one lane because of parked cars.  Complaints are piling up on a Grenville-sur-la-Rouge Facebook group’s page.  One person said people don’t really oppose “sharing the river,” but they do want something done about roadside parking, extra traffic, and the garbage.  “I think we need designated parking spots and garbage drops,” said another resident.  Some comments said the municipality should build a parking area and install garbage cans.  Some even supported making visitors pay for parking.  A resident said she counted 37 vehicles parked in one place on the Canada Day weekend, and 1o of them were double parked or facing the wrong way.  Others completely object to visitors using unofficial places along the riverbank for recreation; “There is a public beach for locals and tourists, use it,” said a resident.

Grenville-sur-la-Rouge Councillor Marc-André Le Gris told the Facebook group the municipal roads committee is investigating the situation with parking and traffic.  He said the municipality is open to working with nearby business owners who have parking spaces on their properties that visitors could use.  Le Gris said they would allow businesses with parking areas to advertise beneath the “no parking” signs the municipality has posted along roads by the river.  Marc Beaulieu said the municipality is always communicating with the SQ over issues involving the river and that every complaint they receive is forwarded to the police.  He said that unfortunately, police are reluctant to issue tickets for littering and traffic violations because the charges don’t often hold up in municipal court.  Alternative forms of enforcement, such as hiring summer students to issue tickets, or giving firefighters special authority to issue tickets have been considered.  But, Beaulieu does not believe students should be doing that kind of work and the municipality determined firefighters should stick to firefighting as their main responsibility.  He said hiring a private security company is another option to consider.

The Director General said there have not been any serious issues with campfires because there has not been any damage to, or loss of property.  A walk along the Rouge during the past weekend revealed this is true, but the evidence of several campfires was found in rocky areas along the river, easily fueled with the abundant supply of driftwood found on the banks.

Further north in Arundel, Mayor Pascale Blais said that municipality does not have a public beach on the river, but there are private campgrounds operating within the municipality.  She said that private beach areas are subject to the property rights their owners have over their land.  However, sections of the Rouge River in Arundel are bordered by the Aerobic Corridor, a 56-kilometre cycling path that goes from Morin Heights to Amherst.

The municipality does not keep statistics on the traffic or occupancy of unofficial campsites in Arundel.  Mayor Blais said the only intervention is when there are complaints about by-law violations, and those include camping in an undesignated area, campfires when prohibited, and noise.  Those complaints are usually handled by the SQ.  Blais said the municipality has been trying for several years to promote communication between property owners, the SQ, municipality, and the MRC des Laurentides.  She said that effort “seems to bear fruit” with good results.