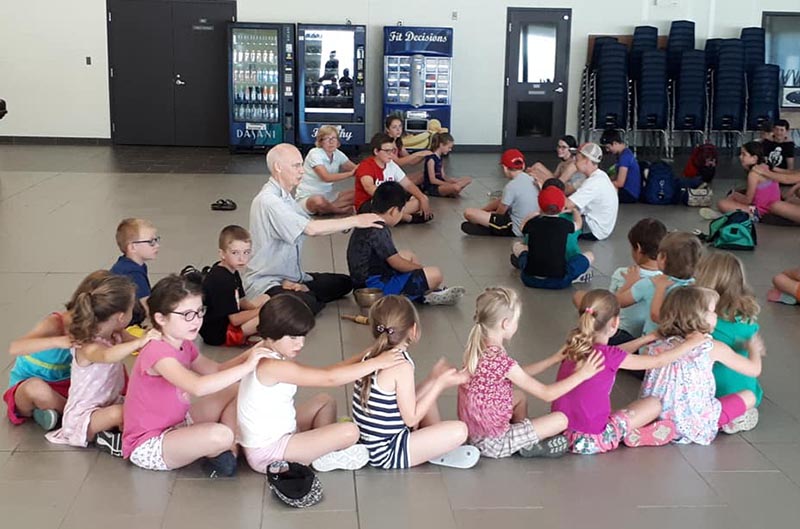 A lively, fantastical music floats through the empty halls of Vankleek Hill Collegiate Institute (VCI). Though its usual students are gone for the summer, their younger counterparts are painting it red (sometimes literally) with music, art, and theatrics. Now in its 19th year, the Vankleek Hill Music and Arts Summer Camp is wrapping up its second week, preparing for the final performance on Friday, June 13 at 1 pm.

Directing a group of kids playing harps, guitars, ukuleles and drums, ian hepburn is clearly an old hand. Using a mixture of genuine enthusiasm, constructive criticism, and comedy, he teaches them not only how to play the instruments – which many of them have never played before – but also how to perform coherently as a group.

“Kids are coming together and learning a variety of instruments,” explains hepburn as his students hurry out for a freezie break.  “There’s also the art part of it with Larry Larouche, where they’ll be doing the costumes and stage sets; and then the drama part is with Cynthia Martin, who’s teaching them all the blocking and their lines and so on. Each one of the kids actually has a huge amount of material to learn.”

Though two weeks seems like scant time to learn a new instrument, remember choreographies and blocking for the entire show and memorize the lyrics to your songs all without sheet music or written aid, hepburn is proud to say that kids absorb it all with little trouble.

“It’s absolutely amazing. Usually on the Thursday, when we bring everything together in the first run-through, it’ll be absolutely insane. But on the day of, when their parents are there, everything falls into place. It’s amazing how much they’re learning in that short period of time – sometimes they remember better than we do! They have phenomenal memories at this age.”

“The whole point of this,” hepburn concludes, “is to offer the kids an exciting two weeks, having fun within the overall context of music and art.”