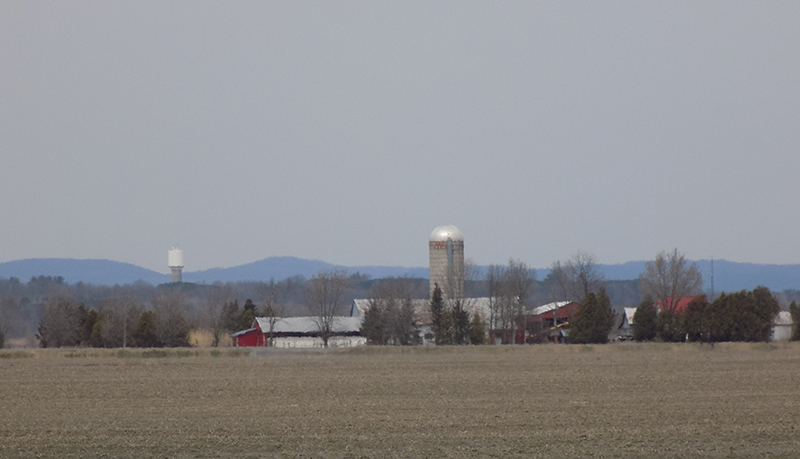 Candidates in the June 7 Ontario provincial election each have ideas about how they would represent farmers and rural residents in Glengarry-Prescott-Russell.  Joël Charbonneau is running for the recently-formed Ontario Party.  He said the most significant issue facing rural and agricultural voters is the carbon tax and noted that alternatives for transportation are difficult in the riding because it is not completely served by public transit, and that a carbon tax is expensive for agriculture because of the amount of fuel that gets consumed.  Charbonneau said the Liberal government has shown a “big lack of consultation” with communities and he also wants to see the privatization of Hydro One reversed.  Charbonneau reinforced his support for supply management in certain sectors of agriculture as well.  Overall, he said “hydro and taxes” are the two biggest problems facing rural and agricultural residents.  Charbonneau also said that the “government should respect municipalities,” and criticized the Liberal Green Energy Act which barred municipal councils from stopping unwanted wind turbine developments.

Libertarian candidate Darcy Neal Donnelly said the cost of hydro and complying with regulations are the biggest issues facing agri-businesses.  He said that if elected, he would commit to not continuing what he called “micromanaging the industry while imposing increased expenses.”  Donnelly said liberalized trade needs to be encouraged through what he called “voluntary competitive trading associations.”  He does not support supply management, either.  “I am not in favour of central planning to control the agri-economy,” he said, offering a preference for local markets that serve market expectations.  Donnelly said residents of Glengarry-Prescott-Russell have been telling him that the cost of hydro, fuel, property taxes, and the encroachment upon private property rights are the biggest issues to them and added that municipalities are imposing “intrusive bylaw regulations.”

“A strong agriculture sector needs healthy communities,” said Bonnie Jean-Louis, the New Democratic Party (NDP) candidate.  She promoted her party’s plans for affordable child care—the so-called “New Mom Guarantee,” public prescription drug insurance for all residents, and better infrastructure.  Jean-Louis said she would like to see the existing Ontario Food Strategy changed to better help young families get established in agriculture.  She said the Liberals have promoted healthier eating, but the NDP would change the school curriculum to promote and emphasize locally-sourced food.  Jean-Louis affirmed her support for supply management but said she would like to see it enhanced to help organic farmers enter the business.

“Hydro bills are just too high,” she said.  The NDP has said it will return Hydro One to public ownership if it forms the next government.  Jean-Louis said Glengarry-Prescott-Russell needs far better access to high-speed broadband internet, and that francophone farmers need better access to information on programs and services in French.  Jean-Louis said that if she becomes the riding’s next MPP, she would like to help fulfill part of the NDP’s New Mom Guarantee that proposes hiring 360 new midwives by ensuring that one of the new midwifery facilities is in Hawkesbury.

Liberal candidate Pierre Leroux said the lack of complete internet and mobile phone coverage for Glengarry-Prescott-Russell, and the lack of access to natural gas service are two major issues facing the rural community.  Leroux said he wants to take time to hear what issues are of concern to farmers and other rural residents and noted it has only been five weeks since he was nominated as the Liberal candidate.  Leroux said he is a supporter of supply management but acknowledged that “you can’t make everybody happy,” in how the economics of certain agricultural products are administered.  On the hydro issue, he said investment is needed to upgrade the power infrastructure of Ontario.  He defended the Liberal Fair Hydro Plan to reduce rates and said the Progressive Conservatives would keep it and add an additional 12% cut to what the Liberals are offering.

“If it’s such a bad plan, then why are they keeping it?” Leroux said about PC criticism of the plan.  The Liberal candidate said that if he becomes the MPP for Glengarry-Prescott-Russell, he will make expanded internet and mobile phone coverage for the rural parts of the district his priority.

“Rising property taxes, labour shortages, and reliable internet” are the issues Green Party candidate Daniel Reid said are the most significant to rural residents.  He said that for farm taxation, he would like to see a single property tax designation for farms, regardless of how they are diversified.  Reid said that would allow farmers to stay competitive.  The Green candidate supports supply management but said changes should be made to the system to encourage better resource management so that surplus products like milk are not dumped and go to waste.  Reid said that some farmer’s he’s talked with told him that over regulation and red tape are their biggest sources of frustration.  He said that if he is elected, simplifying property tax issues and streamlining the permit process for farm developments like new barns would be his priority for the agricultural community.

“Energy costs” are the short answer PC candidate Amanda Simard gave as the most significant issue facing agriculture in Glengarry-Prescott-Russell.  She said those energy costs include “Kathleen Wynne’s carbon tax on fuel for farm equipment, or hydro rate inflation.”  She said higher overhead costs are hurting producers all over the riding.  “The focus of the Liberal government has been on the downtown Toronto elite rather than the working people of Glengarry-Prescott-Russell, Simard said, adding that any continuation of Liberal policies would only further hurt businesses in the riding.  She noted that the Ontario PC party voted to continue supporting supply management at its last convention but that it is red tape, higher energy costs, and higher taxes that farmer’s have been telling her about.  “My first priority if elected is to get to work fixing the mess that Kathleen Wynne has left this province in while she was grasping at power using your tax dollars,” said Simard.