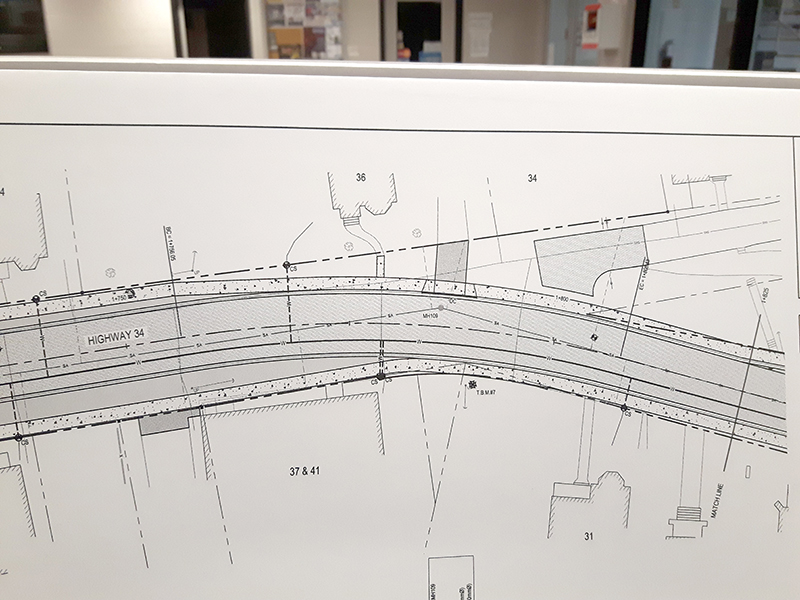 Beginning in June 2018, High Street from Vankleek Hill’s main intersection through to the town’s southern limits will be under construction until late autumn.

The work being undertaken is significant. A full road reconstruction will happen. A new storm sewer will be installed and there will be repairs to the sanitary sewer. But an important part of the project includes installing a new water main, 2.4 meters below the street level and this should remove the threat of frozen water pipes on High Street once and for all. It has been decades that “drip” or “trickle” valves had to be turned on by municipal staff in December at homes on High Street to ensure that pipes would not freeze. Although he is not certain, the existing water main might be only 1.2 meters below the street level, according to Public Works Superintendent James McMahon.

McMahon, along with Josh Eamon of Cornwall engineering firm EVB, were at an April 4 open house organized at the Vankleek Hill Community Centre to inform local residents about the project. Eamon, who is president of EVB, said the staff member who is the most informed about the project could not make it that night as his wife had gone into child labour.

Another significant change is that Methot Street, a one-way street which connects High Street with Main Street West, will no longer be connected to High Street. A barrier will be installed just off High Street, but Methot Street residents will still have access to their homes, of course and will become a two-way street as part of the change.

The sidewalk which currently ends just beyond Wagar and Holland’s building, will be continued to link up with the existing High Street sidewalk.

During construction, one lane of traffic will remain open during regular hours, Eamon said. Construction work will carry on during the regular work week, with no plans for overtime or weekend work, he said.

McMahon noted that while much of the work was covered as part of a provincial connecting link project, the town’s water main and sanitary sewer work would be paid for by users of the water and sewage system.

McMahon said that the profile of the road will not be changing. The next step is to wrap up the plan, which is almost complete (Eamon did not anticipate any changes to the plan) and then, the project will go to public tender towards the end of April.

The work should begin mid-June; a full-time supervisor will be on the job while the work is taking place.