Educating youth, finding them local jobs thanks to $250,000 injection of funds 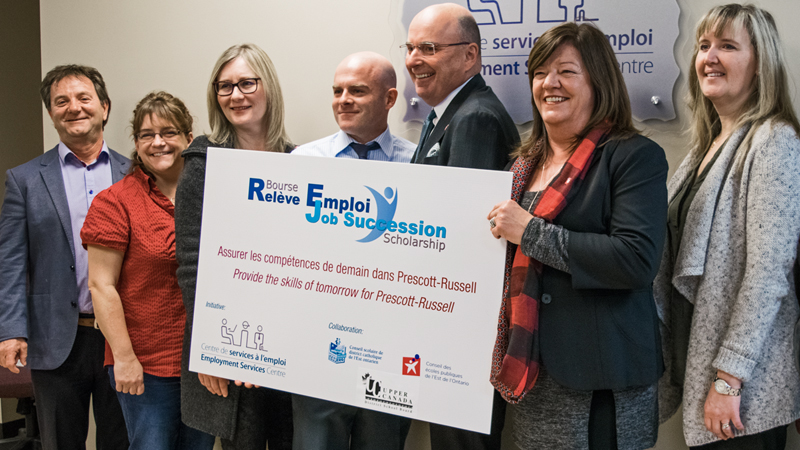 The Employment Services Centre (CSEPR) hopes to stop the exodus of young people from Prescott-Russell. It’s all part of a Job Succession Scholarship program, which pairs employers with students and provides a financial incentive to students, who, in turn, will have a local job waiting for them when they graduate.

Over the next five years, the CSEPR will be investing $250,000 in the initiative.

The program will officially start in spring 2018 in all participating schools, with the $5,000 scholarship being available until 2022.

The Job Succession Scholarship is open to grade 12 students as well as local employers in need of specialized labour. Ten of the $5,000 scholarships will be offered annually by the CSEPR in all participating schools.

Here is how it works. Employers in need of specialized labour will inform the CSEPR of their interest to participate in the program, and if retained by the selection committee, their job offers will be presented to students in participating schools so that those students interested in a trade or a profession can apply for the position. Once the interview process is completed by the employers, the students chosen for the positions will receive confirmation of a guaranteed job with the employers when their post-secondary studies are completed. The Centre will then grant a $5000 scholarship to the students to be paid in 2 instalments as part of the Job Succession Scholarship Program.

The program aims to address the exodus of Prescott and Russell’s youth to large urban centres.

“For participating employers, it’s the assurance to have the skilled labour they need in a trade of profession. For the student, it’s a guaranteed job, and as an added bonus, they receive a $5,000 scholarship. For Prescott and Russell, it’s the gain of young and skilled labour that will help grow our local economy,” said André Roy, Executive Director for the Employment Services Centre.

The Employment Services Centre is currently interested in hearing from employers who would like to participate in the Job Succession Scholarship Program by submitting one or more jobs for evaluation. For further details, they are invited to contact Murielle Huneault Pilon, Job Developer for Prescott, at 1 613 632-0179 or Émilie Avon, Job Developer for Russell, at 1 613 446-4189.