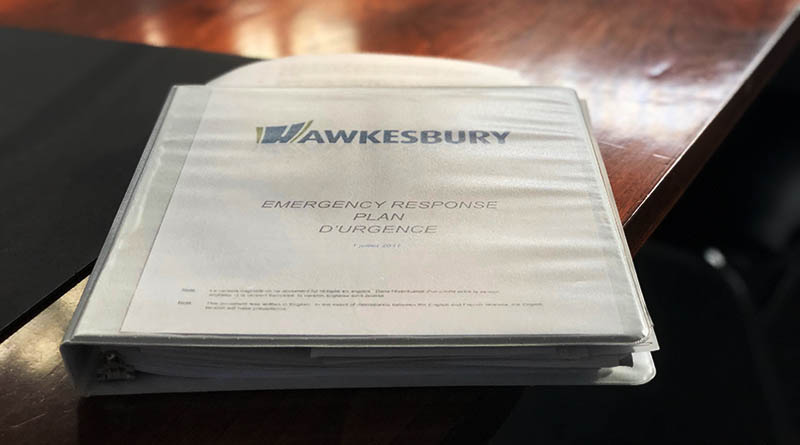 UPDATE: 3:20 P.M., December 13, 2017: The boil-water advisory in Hawkesbury, Vankleek Hill and L’Orignal was lifted by the Eastern Ontario Health Unit (EOHU) after recent water samples confirmed that water from the Hawkesbury drinking water system is safe for use and consumption. The EOHU will continue to work with the Ministry of the Environment and Climate Change and the Town of Hawkesbury to monitor the situation.

UPDATE: 4:45 p.m., December 11, 2017: Champlain Township notes that the boil-water advisory currently in effect will continue as a precautionary measure for at least 24 hours and until the water is deemed safe to consume by the Minister of Environment and Climate Change (MOECC) and the Medical Officer of Health (MOH).

Editor’s Note: This story contains information from a December 11 press conference and information gathered during the past 24 hours. We will update this story as new information becomes available. You will know when the story has been last updated by the date at the beginning of the story.

Even while the Hawkesbury press conference was ongoing, Vankleek Hill and L’Orignal volunteer firefighters and other municipal staff were going door-to-door to deliver boil-water advisory information to residents and businesses in those communities. Residents are also encouraged to only use water when absolutely necessary.

In the evening of December 10 at about 5 p.m., a four-inch elbow on a pipe yielded to pressure at the Hawkesbury water plant. The pipe burst and water flooded the plant, which almost immediately reduced water pressure for Hawkesbury residents.
The water supply valves to Vankleek Hill and L’Orignal were shut down immediately.  (The residents of each of these communities use water which is transported via pipeline from the Town of Hawkesbury. About nine households on the east side of the Town of Hawkesbury are also connected to the Hawkesbury water supply; these homes are located in Champlain Township.)

Both Vankleek Hill and L’Orignal have a standpipe, or water storage tank, which holds about three days’ worth of water. But municipal authorities were not taking any chances and put the word out to the press and on social media Sunday evening, advising residents to severely restrict their water use to only what was absolutely necessary.

The Town of Hawkesbury declared a state of emergency Sunday evening. Within a few hours, the piping in the water plant was repaired, but the flooding inside the plant had damaged the diesel pumps which are used to push the water into the distribution system. What took longer to return pressure to the system was repairing the submerged diesel pumps. A Hawkesbury fire truck was used as a temporary solution to pressurize the water system. A second diesel pump was set to go online mid-afternoon on Monday.

“Nine water samples will be analyzed by the Eastern Ontario Health Unit (EOHU). Usually these tests last 24 hours and we will keep the people informed on the results. We have worked closely with the Ministry of the Environment, the Eastern Ontario Health Unit (EOHU) and the Spill Action Centre and the United Counties of Prescott-Russell. We thank everyone from all the levels of government that came to help us resolve this issue,” said Charlebois.

“A second round of tests will also be done by the EOHU which would, if the tests come back negative, let residents use the water normally. As of now, residents in Hawkesbury, Vankleek Hill and L’Orignal will have to boil their water before consuming it. The EOHU will be keeping Hawkesbury’s Communication Officer, Nicole Trudeau, informed on the results who will in turn keep the media in the loop,”  Charlebois continued.

Hawkesbury has bottled water on standby but will not be distributing the water as of now. If the water comes back positive with contaminants, the town will be able and ready to distribute water to residents.

“The health of our residents is what is most important to us. The lower pressure caused the health unit to issue a preventive water boil advisory. Even though the water plant will be fully operational in the next hour or so, we are taking all precautionary measures to ensure the safety and well-being of residents,” said Charlebois.

Below is a link to the EOHU website on water usage during an active water advisory.