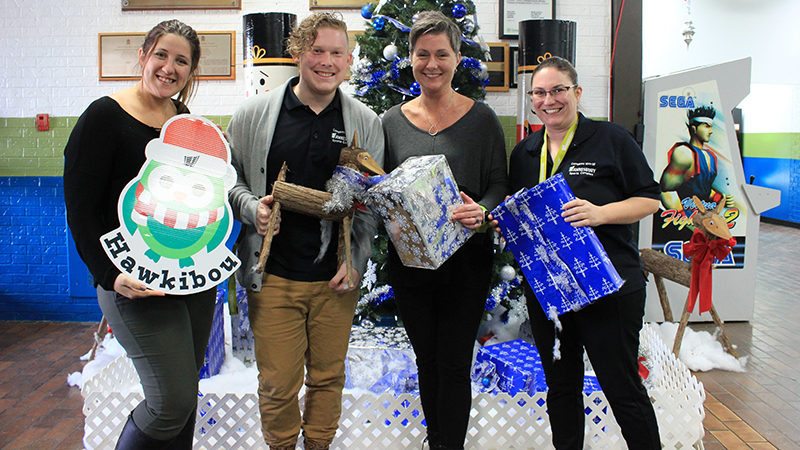 Zoé Fortin, Éric Marcotte, Nicole Trudeau and Kim Maurice of the Hawkesbury Recreational Department are ready for the holidays.

The Town of Hawkesbury’s Recreation Department is in holiday mode with the upcoming Santa Claus Parade on December 2 and the department is planning many more activities for the season. This year, the parade will start in front of the Town Hall and will proceed along Higginson Street, then make a right turn onto James Street all the way to Main Street. It will then travel east on Main Street until making another right turn on Hamilton Street.

Last year the parade went all the way to Cameron Street, but some walkers had to quit along the way because of the cold weather. This year, the rec department opted for a shorter route to make sure that everybody participating in the parade can stay for the duration.

In addition to the parade, the rec department decided to contribute, in its own special way, to the Hawkesbury Central Food Bank Christmas Hamper Drive. From December 4 to 17, the Rec Department will be offering access to Public and Adult Swim schedule for free in exchange for non-perishable food items. Other food items can be offered, but they are asking people to verify the expiration date for all items.

“It’s an initiative we wanted to develop because we really wanted to participate in the Food Bank holiday baskets. We don’t have many volunteers here and we can’t give any money, so we decided to offer residents to come to the arena and give non-perishable food items and get free access to the pool. So it’s really simple: the first two weeks of December, anyone who comes for a swim at the pool, with a non-perishable food donation, can swim for free. We have nearly 20 people on weekdays using the pool and in the weekend, this can go up to 80. So we’re pretty confident we’ll be able to give a helping hand to the Food Bank this year. It’s our way to give back to the community,” said Zoe Fortin, recreation technician.

The Rec Department will leave boxes or bins accessible for people who don’t come for a swim but who may want to contribute to the food collection.

Hawkibou, the Rec Department mascot, will be celebrating his second birthday on December 28. To celebrate, the Rec Department will be opening up the multi-functional room and filling it with bouncy structures for kids. The event will be held between 10 a.m. to 2 p.m. The entry fee will be $5 per child but will be free admission for adults. The pool will also be accessible for no extra charge. Zoe Fortin is still looking for more sponsors for the bouncy structures and is also looking for volunteers to supervise the event.