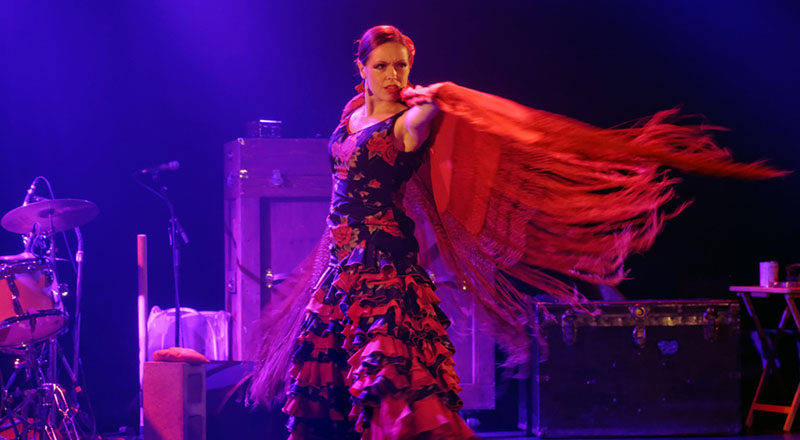 For nearly her entire life, Georgia Pettit has known that she wanted to be a dancer.

However, her dance style of choice has not always been quite so clear.

Starting out in ballet as a young girl, her first goal was to be a ballerina. Then, in her teenage years, she branched out into other styles; she joined a Ukrainian dance group and took part in swing classes. In her late teens and early 20’s, she added salsa dance to the mix, but still, nothing really stuck for her. She was a dance vagabond—a roamer searching for a style to call her own.

That is, until her late 20’s when she took her first flamenco class. For Pettit, it was love at first letra.

“Halfway through, I knew I wanted to do this for the rest of my life.”

Since then, she has thrown herself into the flamenco world, taking as many classes as she can manage, even travelling to Spain for month-long study trips on multiple separate occasions.

She’s practiced with some of the best flamenco dancers in the world, and now, she plans to pass on that knowledge to people in the Vankleek Hill area.

Pettit will start offering flamenco classes to both children and adults from her home studio starting October 3. She says she couldn’t be more excited to share her passion for dance with people in the area who wouldn’t otherwise have the opportunity.

The inexhaustible art of Flamenco

As Pettit explains, the first thing to know about learning flamenco, is that you can never learn enough about flamenco.

“You can study for a lifetime and you still won’t have even scratched the surface.”

To start with the surface: the flamenco dance style originates in the southern autonomous communities of Spain, specifically the Andalusian, Extremadura, and Murcia regions. Drawing from the area’s folk musical traditions, the style is characterized by the interplay between various elements of its performance: cante (singing), toque (guitar playing), baile (dance), jaleo (vocalizations), palmas (handclapping), and pitos (finger snapping).

Pettit says the coordination between the singer, the dancer, and the guitarist is “everything” in flamenco; the three performers must work together at all times to make the show a success. Although the performers usually meet beforehand to discuss a plan for the performance, Pettit explains that there’s always the potential need to improvise in the middle of the show—which only adds to the thrill of the performance.

“We all have to communicate with each other while performing. A lot of things can change very quickly. But that also means that no two shows will be alike. You could have 10 shows and they’d all be different.”

Flamenco, as an art-form, actually serves as a broad category for a number of distinct song styles, or palos, classified by criteria such as rhythmic pattern, mode, chord progression, stanzaic form, and geographic origin. The palos can be categorized in many different ways but traditionally fall into three classes: cante jondo for the most serious forms, cante chico for lighter fare, and cante intermedio for those that don’t fit into either of the other categories.

While still firmly tied to its traditional origins, flamenco continues to develop and evolve to this day. Many of the world’s most prominent flamenco dancers have added elements of contemporary dance to the repertoire of the art-form, while others have adopted a more-stripped down version of the dance—called “flamenco nuevo”—which favours pared-down costumes and borrows from many other musical styles including jazz, rock-and-roll, middle-eastern, salsa, and especially blues. Still, others prefer to remain as close to the classic flamenco foundations as possible.

Pettit notes this variability as a testament to flamenco’s flexibility and to the depth of the techniques involved in the form.

“Flamenco is a very individual dance. There’s just so much to learn, and so many possibilities—everyone is able to find their own place.”

For her part, Pettit tends to stick closer to the traditional end of the spectrum, preferring to work with props such as the fan or the bata de cola—a long, flowing skirt or dress with a train featuring many ruffles.

However, she has also been surprised by forays into more contemporary forms of the dance.

“Once, I decided to take a class with Rocío Molina, who is a little more contemporary and off-the-wall than I’m used to,” Pettit explains. “I wasn’t sure about it going in, but I really ended up liking it.”

Pettit says she likes to learn from teachers who match her more petite body type as well as those who, like Molina, challenge her to push beyond her comfort zone.

Lately, she’s also had to push beyond her comfort zone in other areas of her life, given two new arrivals on the scene—one-year-old, Adeline and two-and-a-half-year-old, Alex. Their addition to the family prompted Pettit and her husband to move away from Montreal and settle in the Vankleek Hill area, which they decided would be more accommodating for raising kids than in an apartment in the middle of a city.

Taking care of two young children has kept Pettit busy for the last few years, and so, she has had to choose her performances more carefully. However, for now, she says she is happy to take classes and, soon, to start teaching classes of her own.

“With two young kids, teaching is easier to fit into the schedule,” Pettit says. “Especially with my own studio in the back…much less travelling.”