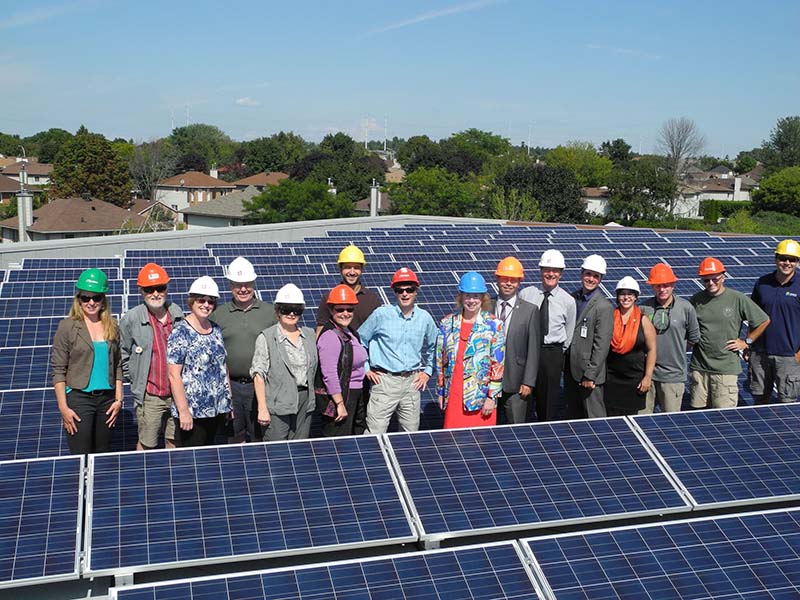 OREC members and school board staff at the launch a project on the roof of Maurice Lapointe School (Photo submitted by OREC).

An Ottawa-based renewable energy cooperative is building its first project in Prescott and Russell, and is holding a discussion about it at the Alfred Recreation Centre (555 St-Philippe Street, Alfred) on Monday, April 10 at 7 p.m.

The Ottawa Renewable Energy Co-op owns 49 per cent of a solar energy project planned for Alfred and has 51 per cent of the voting rights, said David Mazur-Goulet, OREC spokesperson, in a previous interview with The Review. The project will be built south of Du Moulin Street, which intersects with St-Philippe Street, Alfred’s main road.

The co-op works by recruiting members and investors, who share in the revenue generated by OREC’s projects. Three of the co-op’s members are from Prescott-Russell, out of about 600. “We haven’t been very active in the region,” said Mazur-Goulet, but he said the group hopes to attract about 30 local members by the end of April. Members don’t necessarily have to become investors.

The organization says its projects have benefit to people besides investors – construction and maintenance will generate some local jobs. The larger goal, however, it to increase the stability of the energy system by making it less centralized.

A press release issued by OREC says one “challenge of the centralized energy grid is its dependence on long-distance transportation of power. This means significant “line loss” (wasted power that simply does not reach its destination), and leads to vulnerability during extreme weather events,” such as 1998’s ice storm, it says.

At the moment, it’s not possible to have the energy produced in Alfred go to powering homes and businesses in the village.”But in the future, as more renewable energy projects or even local energy generating stations come online, it will be part of a network where it can provide electricity close to home,” Mazur-Goulet said.

He said OREC is aware of concerns about the use of farmland for renewable energy purposes, but noted the project will be built on about four acres of “class four” land. (There are seven classes of land, with one being the best for agriculture and seven being unusable for agriculture. “Class four” land has “severe limitations” affecting agriculture). All Feed-In Tariff projects have to be built on “class four” land or worse. “What’s important is to consider the alternatives,” he said. “Really you’re looking at coal, nuclear or natural gas.” He said solar and wind are “some of the least invasive” ways of generating electricity.

The entire press release from OREC is below.