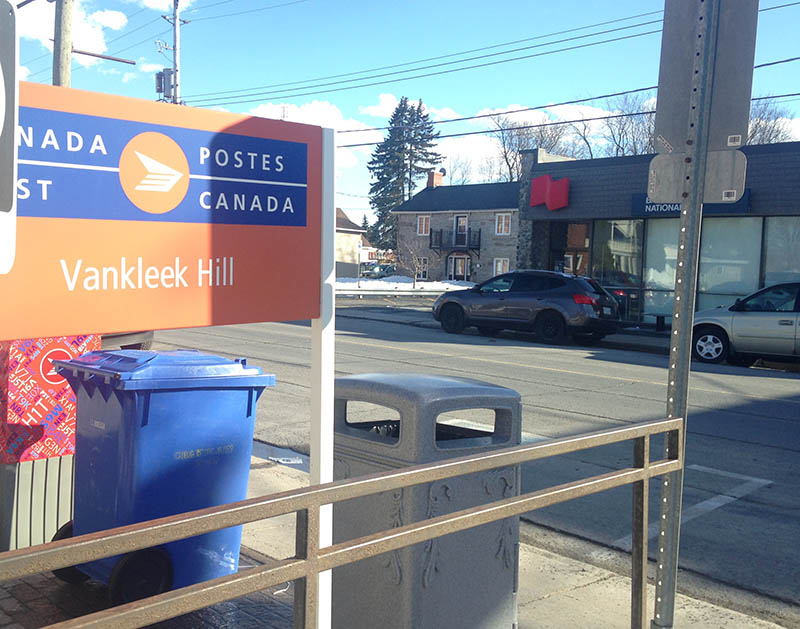 Vankleek Hill’s Canada Post office, across from a National Bank branch. The bank is closing in August, 2017.

Some mayors in Prescott and Russell would like to see banking services offered at local post offices.

The discussion at Wednesday’s UCPR committee of the whole meeting comes after it was announced that three local National Bank branches will be closing in the summer.

“Maybe we can put some pressure so that it goes ahead, especially in places that don’t have a bank at all,” said Clarence-Rockland Mayor Guy Desjardins.

Champlain Township Mayor Gary Barton said he was surprised when he visited Vankleek Hill’s National Bank branch recently, and an employee suggested he try online banking. It turns out it’s the bank’s policy to ask, he said, but he prefers banking the traditional way. “It’s not good for our small communities. Maybe I’m old-fashioned, but I like to speak with somebody when I’m dealing with my business,” he said.

Alfred-Plantagenet Mayor Fernand Dicaire suggested passing a resolution asking for basic banking services at Canada Post outlets, which will be circulated among other municipalities. Three bank branches have closed in his municipality over the past two years, he said: RBC in Plantagenet, Caisse Populaire in Wendover, and now National Bank in Alfred.

The union representing Canada Post employees is in favour of offering banking services at post offices, saying it could help under-served areas, including rural communities, and make money. Their website argues on the subject of rural banking: “The argument is often made by some of those opposing postal banking that even with the decline in branches, we still have enough banking locations in Canada. But a study in 2014, which surveyed 3,326 communities in small town and rural Canada, all which have a post office, showed that, of the more than 2,600 communities which responded, some 45% of them have no bank or credit union branch.” The union, in partnership with the Canadian Postmasters and Assistants Association, is running a campaign pushing for postal banking under the slogan “A Bank for Everyone.”

The Canadian Bankers Association has also weighed in on the issue. In a submission for the Canada Post Review Task Force in June of 2016, it argued Canadians already have plenty of banking options. “The number of branches in Canada has increased from 6,151 in 2010 to 6,348 in 2014. Additionally, many of these branches have extended hours and are open on weekends to better meet customer needs. Banks continue to open new branches,” it said.