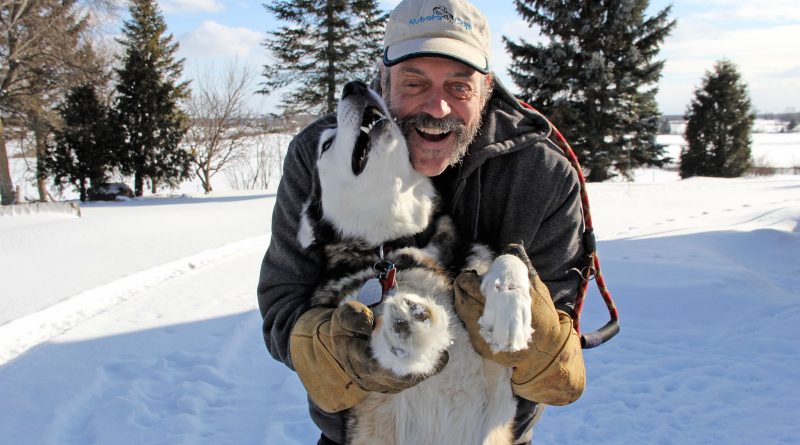 Craig Miller and his dog Cosmo are still recovering following a nasty encounter with a hunting trap. The Alexandria resident says that trap lines should be indicated with signs, warning hikers of the dangers. (Photo: Tara Kirkpatrick)

For Craig Miller and his husky dog, Cosmo, Friday the 13 lived up to its unlucky reputation.

After feeding his horses on January 13, Miller told The Review he decided to take Cosmo out for a walk along an ATV path that comes out near Bush Road, in Alexandria. It’s less than a kilometre from Miller’s house and the trail was hard-packed by the passage of recent ATV traffic.

“We were walking down the trail when Cosmo went off down a new side trail to investigate a bump in a fallen tree branch. When we got closer I could see that the bulge was a dead animal. Cosmo stood up on his hind legs to get a closer look and he put his paw right into a trap that was set on the branch and wired to the tree. As soon as the trap snapped, he didn’t bark or howl. He screamed,” said Miller.

Cosmo was unable to move. Miller unsuccessfully attempted to release the trap, while also trying to keep his dog from chewing at its trapped leg. Using one hand to control his dog, Miller used his other hand to break the wire binding the trap to the tree.
When the wire snapped, the pair fell into the snow, under the branch, which was about five feet off of the ground. During this time Cosmo bit and snapped at his owner’s hand.

In retrospect, Miller says he should have used the belt of his coat to create a muzzle, but in the moment he was focused on keeping his dog from chewing its paw free. Placing his leg between the dog and the trap, he again tried to release the trap, but failed.

With few options, Miller began to carry his dog through the snow, towards home.“Cosmo is 77 pounds and I’m not that big of a guy. I kept having to take breaks, and I was falling through the snow the whole way. I also had to pick him up in such a way that the trap and his leg were supported. It was very awkward,” said Miller, who left his dog at the edge of the woods to seek help.

Miller tried screaming to the neighbours, but said they were simply too far away and the region was just too remote for anyone to hear him. After reaching the road, Miller stepped into traffic and flagged down two trucks that were passing in opposite directions. The two drivers helped to load Cosmo into one of the trucks. The trio then headed back to Miller’s farm, where they used an angle grinder to cut the bars off of the trap.

Miller estimates his dog was in the Conibear 220 trap, which is used to trap fishers and other small animals for at least an hour. During that entire time, he says Cosmo was biting at him and in a completely panicked state.

“The second we got the trap off, it was like nothing had happened and he was back to his friendly self,” said Miller, who then loaded his dog into his car and drove him to the veterinary clinic in Alexandria.

On the way to the veterinarian’s Miller said he began to be aware of the damage to his own hand and leg, which were covered in blood.

Miller’s wife, Judy, met him at the veterinarian’s office and rushed inside with Cosmo. At that point, Miller said he began to feel weak. He feared he was going into shock. Miller asked a man going into the clinic if he would drive him to the hospital, fearing that he wouldn’t make it on his own. He calls the three men who helped him “life savers.”

Two weeks later, the dozen or so puncture wounds on Miller’s left hand are healing, as are the deeper gashes in his leg. He is seeing a nerve specialist for some damage to his hand and an additional specialist to help him recover his voice, which remains scratchy from screaming. As a professional singer, in the “Bluesville Express” band, Miller said his vocal constraints have him worried.

Despite the painful experience, Miller says that he does not feel animosity towards the hunters and trappers in the area, but he does say that he thinks trapping areas need to be better identified with signage.

“I walk on that trail three or four times every week. Next door there are four small children who also play there. I went and warned the kids and their parents about the traps,” said Miller.

Jolanta Kowalsky,a senior media relations officer for Ontario’s Ministry of Natural Resources and Forestry confirmed that current legislation does not require trappers to put up signs surrounding areas where trapping is taking place.

“There is no minimum setback from trails and signage is not requires. However, the Ministry of Natural Resources and Forestry encourages trappers to set traps at a safe distance from roads and trails, to use dog-proof trap sets, and to communicate their trapping activities to other users,” said Kowalsky, in an emailed response.

Trapping seasons vary by region, but generally run through the winter season.“They need something to indicate the existence of these traps. If I had seen a sign, I would have stopped right there. Even if it had just said private property, I would have walked elsewhere. I’m not trying to get people to close trails, or to change the trapping industry or destroy its effectiveness, but I think that it’s a simple courtesy to the hiking public and to their pets to warn people about these traps,” said Miller.

Miller admits that he was likely trespassing at the time of the incident and says that he will be hiking elsewhere in the future.

His concern is that without signage, a similar trap might ensnare someone else and that the situation might be worse next time.
“Just give me a way to not step right on top of one of these traps,” said Miller.

Ontario recently published a website with detailed information on ways to protect your dog from wildlife traps – check here for more information. Access to trapping on private land is controlled by the owners. Landowner permission is required to trap on private property.