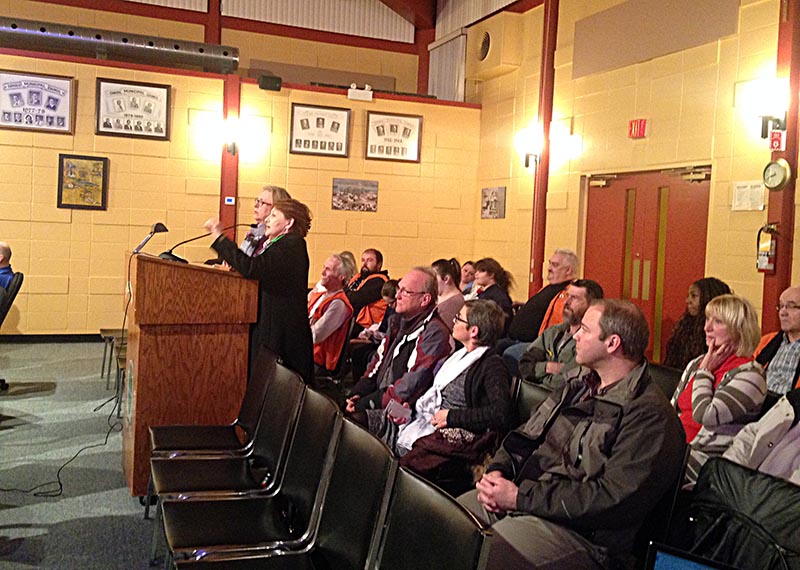 Paula Assaly and Lynda Clouette-Mackay speaking at the Hawkesbury council meeting of January 16.

Monday night’s meeting of Hawkesbury council devolved into a shouting match between representatives of Le Chenail Cultural Centre and some councillors, including Mayor Jeanne Charlebois.

The cultural centre recently received a grant for renovations at Maison de L’Ile. The discussion Monday evening focused on whether Hawkesbury council, in passing a certain resolution in 2015, “pre-approved” renovations now funded by the Ontario Trillium Foundation.

Paula Assaly of Le Chenail said council had already “pre-approved” renovations planned for Maison de L’Ile with a resolution in November of 2015. She said getting approval from council was required in order to submit an application for funding. Assaly said now, Le Chenail will create detailed plans of the renovations, which will be presented for council.

But some council members didn’t agree plans had been “pre-approved.” The resolution from 2015 says “be it resolved to authorize the Centre Culturel Le Chenail to submit a grant application with the Ontario Trillium Foundation for works described in schedule ‘E.’” It also says that Le Chenail must “limit the repairs to the funding granted by the Ontario Trillium Foundation and that the works will have to be confirmed by council once the grant is awarded.”

When that resolution was on the agenda in November of 2015, discussion was not focused on proposed renovations, but on a clause in the original version of the resolution stipulating council “recognizes Maison de L’Ile as a cultural space for Centre Culturel Le Chenail for the next five years.” That clause was removed at the suggestion of Councillor Daniel Lalonde and the resolution was approved.

“We came here twice to ask you for permission to make improvements that are in a schedule that you’ve seen,” said Assaly on Monday evening. “In the resolution it clearly says that you pre-approved (renovations).” But she agreed Le Chenail would return to council when the plans are complete.

“I think there has been a misunderstanding of our resolution,” said Charlebois. “The evening you came to present your application, there were discussions at the table, and there was no consensus.” She said council didn’t want to delay the grant application, so they passed the resolution, under the condition that Le Chenail would have to come back to council before any renovations were started.

That began an argument – with representatives of Le Chenail insisting the work had been pre-approved, and Charlebois arguing that was a misunderstanding of the resolution.

“Members of your board of directors are here tonight, and now they see how you respect the council,” said Charlebois.

“You don’t respect what you yourselves adopted,” responded Assaly, speaking over Charlebois as members of the crowd began shouting and walking out of the council chambers. “If there’s anyone who was acting in bad faith here, it’s you, and it’s not me who says it, it’s Judge Kane,” said Assaly, referring to the judge who presided over the case when Hawkesbury attempted to evict Le Chenail from Maison de L’Ile. Kane ruled in Le Chenail’s favour.

Outside the meeting room, Le Chenail artistic director Lynda Clouette-Mackay said she isn’t sure what the next step for Le Chenail will be. “We don’t understand,” she said. “They just want to give us problems…for now I have no idea what we need to do.” She said councillors were “all mixed up.”