Are you a Vankleek Hillbilly? Get the T-shirt. 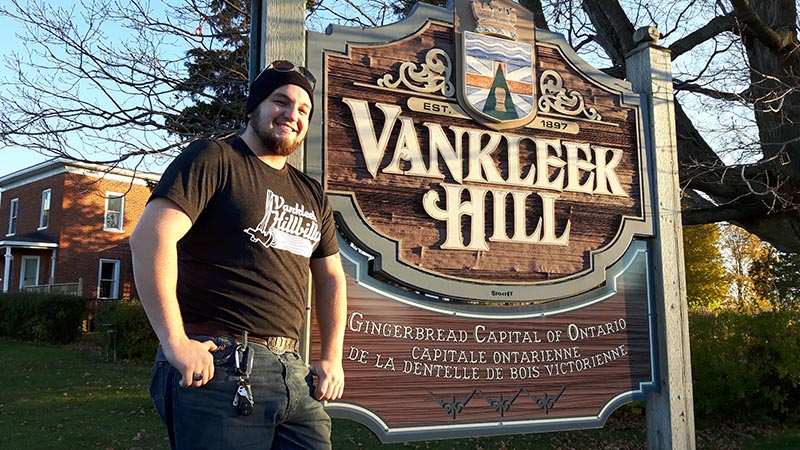 Todd Gilbert is proud to be a Vankleek Hillbilly. And now you can be one, too, he says. Gilbert launched a new line of T-shirts this week.

Gilbert launched a line of T-shirts emblazoned with “Vankleek Hillbilly” this week. Just for fun, he says. The T-shirts have an “old-school” look, says Gilbert and are printed locally.

Gilbert is known for his sense of humour. While the distribution manager at Beau’s All-Natural Brewing Company has produced his own videos, (including parodies of news stories from The Review) he is often a collaborator and appears in satirical videos produced every year in Vankleek Hill under the name: Lawless Vankleek Hill.
Gilbert also makes regular appearances on Revision Radio, (a weekly show streamed on Vankleek FM) hosted by friend Eddy Earwigg. Gilbert’s characters include Dr. Od, Rod Gilbank and sports reporter Chuck Baseball. BTW: Eddy Earwigg is also a pseudonym.

In fact, when Beau’s owners organized a dramatic announcement to employees last year, then announced to a quiet room that the company had been sold, the gravity of the situation dissolved as the new owner was announced: the name “Rod Gilbank” communicated instantly that fun was afoot – and then as the names of other Beau’s employees came pouring out, everyone realized that the news, in fact, was that Beau’s employees would now have shares in the company.
Hats and hoodies are in store for the new year, says Gilbert, but for now, the T-shirts, described as being made from a soft, tri-blend fabric are for sale for $25 each. Orders are being accepted until November 27 for Christmas delivery.
You can order yours at: www.vankleekhillbilly.ca