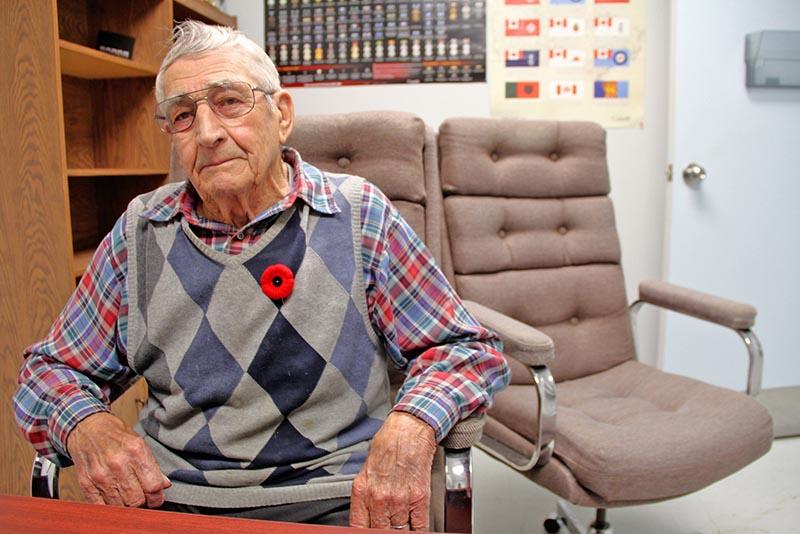 Surviving WWII made Claude Guy Lalonde a pretty tough character. At 97, he remains physically active and as sharp as a tack. When The Review met with Lalonde at the Hawkesbury Legion on November 2, he had just spent two hours cutting his grass. He was impatient to get through his interview so that he could return to work.

Lalonde was 21 years old when he joined the Royal Canadian Army Service Corps. He had many jobs in the army, including a stint with the infantry brigade.

After completing his training in Canada, Lalonde was sent to Britain. He traveled throughout Europe, crossing from England, to Belgium, Holland and Germany. He followed the fighting, working in munitions and refueling troop transport vehicles.

It was his job to clean the 25-pound guns, to stack the munitions and to maintain fuel supplies.

“The infantry soldiers we served with thought we weren’t in danger. We weren’t on the front lines, but we were sitting on a bomb, and we were targets,” said Lalonde.

Working in an ammunition dump surrounded by high-explosives, fuel and combustible material, Lalonde said it would have taken only a tiny spark to start an explosion that could obliterate ten-square miles.

Lalonde spent four years in the army before returning home to Hawkesbury. He remains an active member of the Legion.