Noel Paine ran for his birthday and for cancer awareness 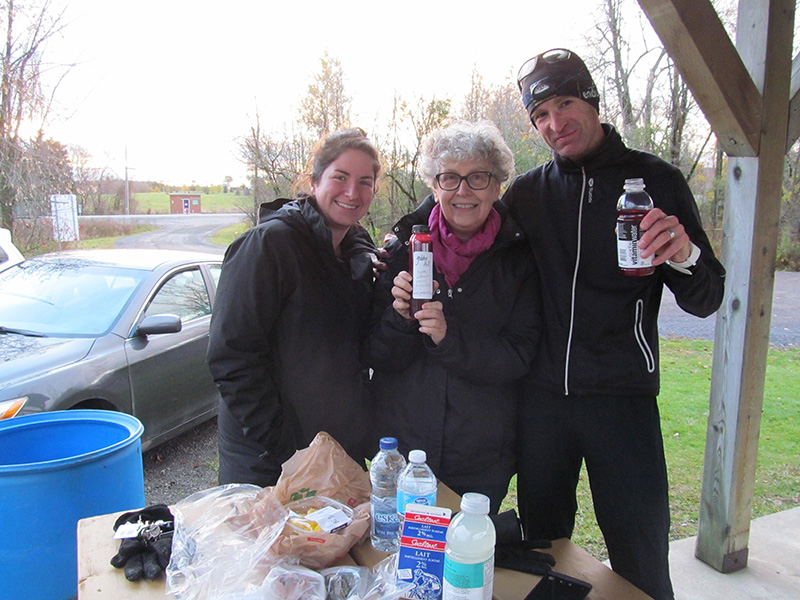 Vankleek Hill Business and Merchant Association president Vicky Jean Louis, Review publisher Louise Sproule and Noel Paine met at the Vankleek Hill pavilion along the Prescott-Russell Recreational Trail at about 8 a.m. on Sunday, October 30. Champlain Township’s Economic/Communications Coordinator Jacques des Becquets was also there (he took the above photograph). The three local residents brought Paine some breakfast and lunch snacks, including a cold-pressed juice made by Jean Louis. Noel Paine is a runner, writer, blogger and government worker who works in Ottawa and lives in Gatineau. For his 41st birthday, he ran about 100 kilometres for a personal journey but also to raise money for the Canadian Cancer Society and to raise awareness about the Prescott-Russell Trail. Last year, he celebrated his 40th birthday by running with a friend from Kingston to Ottawa on the Rideau Trail (258 kilometres in 2.5days) and raised money for cancer along the way. This year, Paine was running from Rigaud, Quebec along the Prescott-Russell Trail to Ottawa. He began his journey around 4 a.m. in Rigaud, QC and ran from there onto the Prescott-Russell Trail and made his way back home to Ottawa/Gatineau.
You can donate on Paine’s fundraising page here:  http://convio.cancer.ca/site/TR/UnitFundraisingEvent/General?px=6998771&pg=personal&fr_id=22115#.WA5HEI8rKUk