Settling into life as a War of 1812 reenactor 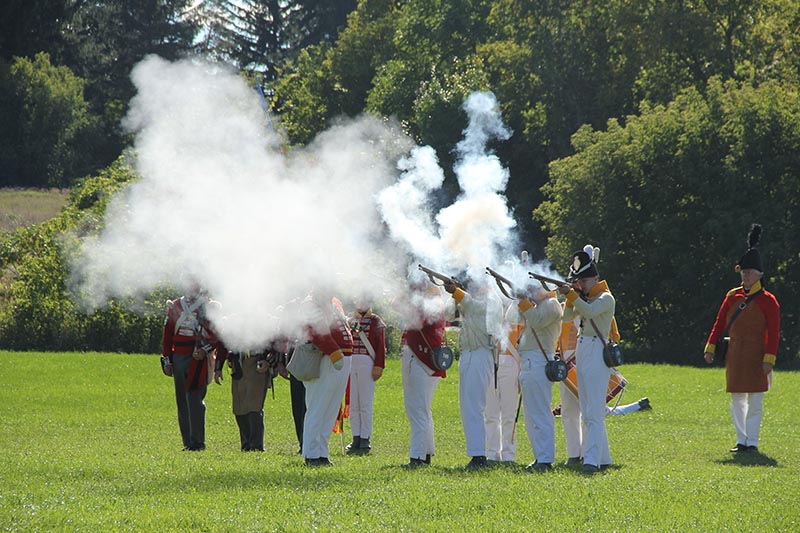 At the seventh annual Battle of Glengarry, reenactors representing British and American forces went to battle in a skirmish representative of one that might have taken place during the War of 1812. (Photo: Tara Kirkpatrick)

Attending a war reenactment as a participant is how I imagine it would feel to be a time traveller. You are given appropriate period costume and are expected to know who won the battle, why it was fought and what it might have been like to have lived in that time period.

What you may not be prepared for is how cold it gets at night, how difficult it might have been to have lived in that time and how much courage it must have taken not only to walk into battle, but just to survive life.

Last weekend I joined the Glengarry Light Infantry and participated in the seventh annual Battle of Glengarry. The event is held each year at the Glengarry Pioneer Museum to commemorate the War of 1812. It also showcases the living conditions faced by some of Canada’s earliest settlers.

I started my three-day weekend excited, but nervous. My camping skills are limited, as is my knowledge of the era. I also mistakenly put on my period dress backwards. That was quickly repaired before the arrival of nearly 350 local school children who arrived for education day on Friday. As a guide, I was responsible for leading Ms. Andreanne’s Grade 8 class from St. Jude Catholic Elementary School, through the various exhibits. I was assisted by the event coordinator, Jim Mullin’s, ten-year-old daughter, Hannah. When we were unsure of which building was which on the map, Hannah would run ahead and scout out the area. She did a lot of running. The kids had the chance to speak with the exhibitors and also participate. Captain Dan Williams of the XIX Light Dragoons cavalry troop taught the kids to march and stand in proper formation. He did this loudly and with great humour. The 13 and 14 year olds represent the same age group as children who would have joined the cavalry back in 1812. They got to meet Williams’ two cavalry horses, India and Hero, and to learn about the role of the cavalry.

In the single-room school house, the children sat down for class and learned about the primitive teaching methods of that time. In Upper Canada during the early 1800s most teachers were retired military officers with limited teaching skills. Some of them were barely literate. Books were scarce and children were taught the basics of reading and following directions.

A navy display taught the children about the consequences of not following orders. They were shown the various tools used to flog disrespectful sailors and were also shown the types of food that would have been consumed at sea. Most were surprised to find out that beer and grog were the drinks of choice. Water would spoil at sea, while alcohol could be preserved.

It wasn’t all sitting and talking. Drummond Fraser, another member of the Dragoons, put the children through their paces in an interactive fencing demonstration using foam swords. During their fencing lesson, the children were taught how to stand and hold their sword. They were then instructed in six initial movements used to cut and block. It sounds simple to perform six continuous actions, but it’s harder than it looks. It took Fraser’s five-year-old daughter, Meredith, under a minute to defeat me. She did it while giggling.

The demonstrations continued throughout the weekend battles with the support of fencer Sébastien Larivée and Fraser’s seven-year-old son, Pearson. Swords were worn by officers during that period and remained a viable form of defence.

Life in the early 1800s wasn’t easy. By the age of 14, most boys would either be marching off to war or busy working on the family farm. The wealthier families might have purchased a commission for their sons, so they could train to become army officers. As a young teen, they would have lead men twice their age into battle. Girls had no options. They managed the home and raised children. Few had the opportunity to work and their voices were stifled.
The life expectancy during that period was around 30 years age. As a 35-year-old woman, I would have been considered ancient. If I were literate during that period, by writing skills would be limited to letters to family. Women’s voices were not welcome in the media at that time.

Lives were lost in battle, but infection, childbirth and simple accidents could prove just as deadly. Many early Canadian settlers suffered from malnutrition and large numbers of them starved. During the War of 1812, provisions were limited. Food, clothing and kit were often scavenged from the battlefields. Spent cannon shells and destroyed cannons could be melted down by blacksmiths to forge new equipment. Wool, linen and cotton were worn in layers to keep warm in the changing weather conditions.

It wasn’t all despair. Community dances, gatherings and parties were not uncommon at that time. On Saturday night I had the chance to participate in the English Country Dance, hosted by the Baroness Elena and her Chevalier husband. My partner was a dashing older American who very patiently corrected me when I would unfailingly twirl in the wrong direction. Our partners were two small girls in long dresses who laughed nearly as hard as I did through most of the dance.

Kids practice drills with wooden muskets at the 2016 Battle of Glengarry. (Tara Kirkpatrick).

Reenactors come from all walks of life. In Glengarry, many of the reenactors had a background in the Armed Forces or in teaching, but there were also historians, lawyers, sales clerks, artisans and more. They travelled from across Canada and the United States to participate. A young couple from Indiana travelled more than 14 hours to partake in the battle. They met and fell in love at a similar event held in the U.S. Crossing the border with a musket and period dress elicited some questions, but they said it didn’t delay their crossing overly long.

Family is a big part of reenacting, as is community. Many of the reenactors have been participating in this hobby for years- some for decades. One couple told The Review that they began reenacting in 1975. They were just about to retire from it a few years ago when their grown children talked them into continuing. They wanted to bring their own children to the battles and told their parents they wanted to ensure it remained a family tradition.

Camp children are treated well during the battle. While they may look a little wild as they run through camp in their britches and long dresses, you can bet that they are well watched and well monitored at all times, not just by their parents, but by friends and fellow camp settlers who act as a community.

The various camps are set up prior to the battle and most of the participants stay on site for the entire weekend. They put most regular campers to shame. Over an open fire, with no refrigeration and limited supplies, they make elaborate meals that are cooked slowly and with care. The 100-cup coffee pot in the museum delivered a steady stream of a cloudy, grey, coffee-like substance. It was no match for the dark brew prepared over Sue MacLean’s campsite.

At the end of the day, when the public is gone, the camp settles in for the night. While sipping coffee and beverages, hot water is poured down the barrels of the muskets. It helps to remove the debris and gunk from the guns and is the first stage of an elaborate cleaning process. Water is hauled for the cavalry horses and meals are served over the campfire.

Electronic devices are rarely seen and the escape from the constant invasion of social media updates and work emails comes as a surprise relief. Conversation and laughter takes its place.

Some re-enactors, like this couple from Indiana, come from far away for the battle. (Photo: Tara Kirkpatrick)

As a newbie reenactor I was taught the importance of wearing the right clothing. Reenactors are often teased and referred to as “thread counters” for their attention to historic detail. The clothing they wear is designed using period patterns and it is sewn by hand. They only use materials that would have been available during the period they are depicting. They will relentlessly tease newbie’s who make fashion mistakes. Getting dressed can be complicated. I learned the mistake of putting on my stays, a corset by a more modern name, before lacing my boots. It turns out that it’s highly difficult to bend over while dressed in a stay. Army officers can take up to an hour to dress for battle and they require the assistance of at least one person to prepare. A noble woman could take twice that much time to prepare. Missing a layer and making a fashion mistake could cause irreparable damage to her reputation.

The clothing is elaborate, but practicality is also important. When the temperature dropped at night, I was happy to borrow one of the heavy wool capes worn by the Dragoon officers. The capes have arms, so that they can be worn over a coat and to allow better access to cavalry horses and weapons.

Prior to battle, the leaders in each camp meet to plan their attack scenario and to ensure that the process goes smoothly and safely. This year, children and women were added to the scenario to show how a raiding party might have stolen provisions to survive. After being chased from the field, the children, representing the British camp, shouted at the soldiers to return their food. Theirs were some of the loudest cheers when the Brits won the skirmish, pushing the Americans back into the woods.

What I learned about reenacting is how fun it is to disconnect from reality and to escape in history for three days. I learned a lot about my country’s past and the heritage of my own Scottish ancestors and the life they would have lived. I made a number of new friends, who taught me new skills and supported my first foray into a fascinating hobby.

If you’re looking for adventure and enjoy looking at the stars over a warm campfire, come out to the Glengarry Pioneer Museum for next year’s battle. It will coincide with Canada’s 150th anniversary celebrations and is expected to have some new additions and surprises.