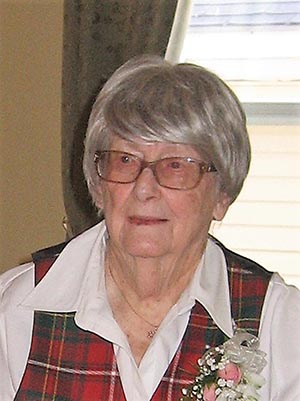 MCCASKILL, MARY BELLE
Mary Belle McCaskill of Alexandria, age 96 years, passed away on Monday, August 28, 2017. Beloved wife of the late Malcolm George McCaskill. Dear mother of Malcolm Earl McCaskill (Doreen Ann) of Almonte, ON and Mary Linda Pavey (late Michael Arnold Pavey) of Calgary, AB. Cherished grandmother of Shawn (Laura), Scott (Heidi), James (Megan), Shannon Thomas (Howie), Matthew (Amber), Mark and Ian (Robyn) and great-grandmother to Sarah, Kirsten, Grace, Carson, Jackson, Berni, Joe, Maddie, Caroline and Jack. Survived by her brother-in-law Cameron Munroe (late Margery McCaskill) and her sister-in-law Sarabel Nixon (late Stanley). Dear daughter of the late Donald William Hay and the late Mary Jane Brodie. Predeceased by infant daughter Alice Jane and brothers Donald T. Hay (Joan) and (late Dorothy) and Wyman C. Hay (late Madge), by sisters Hazel Jamieson (late William) and Lyla Hay and by brothers-in-law Melvin McCaskill (late Faye) and Allan McCaskill (late Muriel). Relatives and friends may call at Munro & Morris Funeral Homes Ltd., 114 Main St. South, Alexandria (613-525-2772) for visitation from 10:00 to 11:00am on Thursday, August 31, 2017. A Funeral Service will be held in the Chapel of the Funeral Home on Thursday at 11:00am. Private family interment at Greenwood Cemetery, Vankleek Hill, ON. In lieu of flowers, donations to the Glengarry Memorial Hospital and Chateau Glengarry would be greatly appreciated. Many thanks to Dr. Power and Dr. Ross for their exemplary care and to the compassionate nurses of the Glengarry Memorial Hospital. As a Memorial to Mary a tree will be planted in memory woods. Condolences may be made online at www.munromorris.com