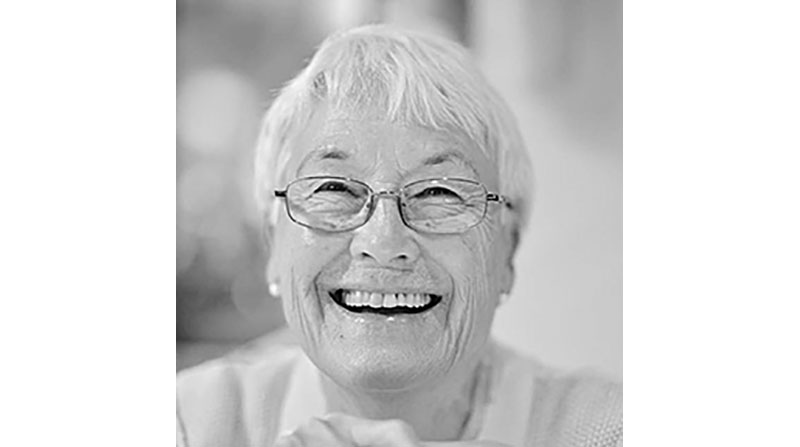 Hildegard Anna Knowlton
(nee Fehrenbacher)
April 3, 1936 – December 23, 2020
Peacefully at home with her family by her side. She leaves behind her life partner of more than 60 years, Nick, her daughter Ingrid (Geoff), son Scott (Debra), and her grandchildren, Nixon, Jake, Isobel and Eric. Hildegard was born in Duisburg, Germany but spent much of her childhood in the beautiful Black Forest during the second world war. A visit to her sister in Canada in 1958 began a lifelong adventure after she met Nick and chose to stay. An accomplished skier, equestrian, gardener, hiker and (in later life) an enthusiastic golfer, Hildegard set the high bar for living an active life. She became a realtor and partnered with Nick once her children were older and sold many homes and farms in eastern Ontario. Her family was especially proud of Hildegard’s decision to attend Carleton University at the end of her real estate career where she not only studied Spanish with Nick (a sly strategy to gain access to the university fitness centre) but eventually earned a degree in English literature. This launched an insatiable appetite for reading which often saw Hildegard immersed in two or three novels at a time and active in several book clubs. A doting grandmother to her four grandchildren, Hildegard never missed an opportunity to spend time with them in their formative years, whether it was a sleep-over at Grandma’s, a trip to the Rideau Centre or visits in Florida. In retirement, Hildegard and Nick hiked many parts of Europe, cruised the Atlantic and Caribbean and eventually landed in Florida where they spent 16 idyllic winters and enjoyed the company of a host of new found friends. Up until the spring of 2020, Hildegard’s Florida routine would invariably begin with a two-mile walk around their community and end with a swim. More often than not a game of golf would be included in her day. Hildegard’s family will have a private internment in the spring and a celebration of her life will take place in the summer of 2021. In lieu of flowers, donations may be made to the Canadian Cancer Society.