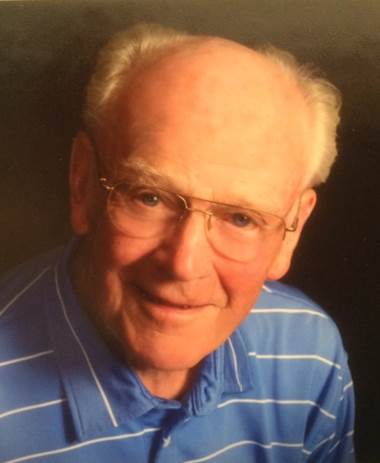 It is with great sadness that we announce the passing of Mike Hinde on August 27, 2017 at the age of 89, after a brief illness.

He was born on July 14, 1928 in Sheffield, England. He graduated from Sheffield University in 1950 and began his career with United Steel Cos. in Sheffield. In 1951 he joined Canadian Refractories Division, Kilmar, Quebec. He transferred to Montreal in 1955 where he held various executive positions before becoming President in 1976. He transferred to Pittsburgh with Harbison-Walker, a division of Dresser Industries, where he worked until his retirement in 1986, when he moved to Youngstown, New York.

He married June MacLeod, daughter of Bond and Ellen MacLeod, on August 20, 1955. June predeceased Mike in 1999. He is survived by his two daughters Lyanne Booth (Fred) and Liz Russchen (Ted) who both reside in Ontario. He is also survived by his loving wife, Fran Engel whom he married in 2015.

A memorial service will be held Thursday, August 31 at St. John’s Episcopal Church, Youngstown, NY. Donations may be made to a charity of your choice.