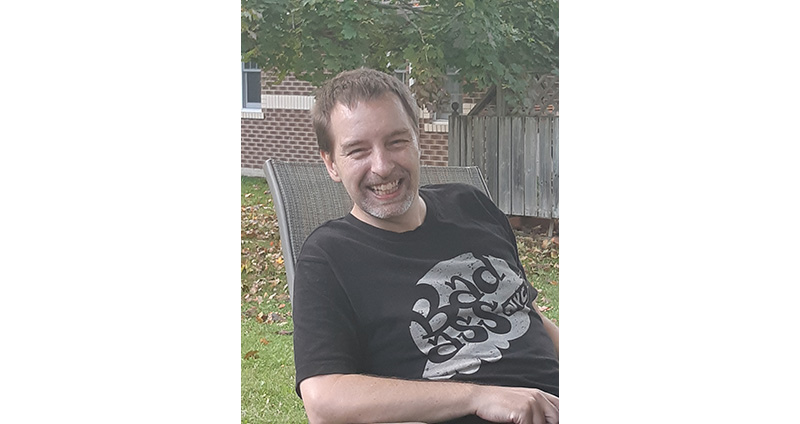 HAFKE, NICHOLAS
It is with great sadness that we announce the passing of Nicholas (Nick) Hafke on the morning of October 10th 2019 at the Ottawa General Hospital after Critical Care Teams both there and at Glengarry Memorial Hospital worked all night to try and save him. He was 44 years old. Nick is survived by his parents, Val and Georg Hafke and sister Ingrid (Thomas) Bill of Maxville, brothers Christopher (Monica Nguyen) of Ottawa and Marty (Angie Abdou) of Fernie, BC. He will be sorely missed by nephews Markus and Matthew Bill and Oliver (Ollie) Hafke and niece Katherine (Katie) Hafke. Nick was born in Johannesburg South Africa, and immigrated to Canada at the age of 6 with his family. The Hafkes were welcomed into Hawkesbury by Holy Trinity Anglican Church which Nick attended, and a subsequent move out to Pleasant Corners Road to experience rural Canadian life did not diminish his attachment to the church. He attended Pleasant Corners Public School and one year of Vankleek Hill Collegiate Institute before moving to Fernie, BC with his family. He was very excited to see the Rocky Mountains and try skiing and later snowboarding. He attended Fernie Secondary School followed by a couple of years of East Kootenay Community College, where unfortunately mental health issues prevented him from achieving his full potential. Back in Fernie he worked at Just Pizza which he subsequently took over and he was a familiar face there on and off for over 20 years. He enjoyed driving for Kootenay Taxi for a while until his health precluded him from that line of work. The sale of the business allowed Nick and the family to move back to Eastern Ontario in 2018 where he settled in Maxville close to his parents and sister. He loved the small town vibe in Maxville and was extremely happy here, helping out at the Veterinary Clinic and taking Ingrid’s donkey to local fairs and parades when his deteriorating health permitted. Nick was a gentle soul trapped in a sometimes harsh world, and he found day to day life difficult. Even a trip to the grocery store could cause a panic attack, and he liked to stay close to home where he confided once that his skill at video gaming was sadly not commensurate with the amount of time he spent on it! When he did socialize he was bright, funny, incredibly enthusiastic and full of ideas and plans, few of which ever got realized. His laugh was infectious, and is one of the things we will miss most about him. We take solace in the fact that his 18 months in Maxville have been some of the happiest of his adult life. We miss you dearly Nick, and wish you the peace you so richly deserve. Thanks to the Critical Care teams at Glengarry Memorial Hospital, the Ornge Critical Care team and the Team at Ottawa General under Dr. Patel for all they did to try and keep him with us. A Memorial Gathering will be held at the Maxville Curling Club on Saturday, October 19th from noon to 3pm.