The number of COVID-19 outbreaks at long-term care facilities and retirement homes across the jurisdiction of the Eastern Ontario Health Unit (EOHU) had increased to five as of Friday, October 16.

Four of the 35 cases at the Prescott and Russell Residence in Hawkesbury had been resolved.  When asked why they were declared resolved just seven days after the positive test results were obtained, EOHU Medical Officer of Health Dr. Paul Roumeliotis said on Friday that because the outbreak had initially been classified as a respiratory illness that was later found to be COVID-19, the required 10 days for as case to be resolved had passed.

Roumeliotis said that the origins of the outbreak at the Prescott and Russell Residence have still not been determined.

There were 134 active cases of COVID-19 across the jurisdiction of the Eastern Ontario Health Unit (EOHU) as of Friday, October 16, bringing the number of cumulative cases to 409.  Out of that amount, 262 cases were officially resolved.

Due to the steady increase of cases across the EOHU’s territory, Roumeliotis said on Friday that discussions are taking place with the Ministry of Health about if the region should be returned to a modified version of Ontario’s Stage Two for how businesses and services should open and operate.

He said that if the current rate of increase continues, a move to Stage Two is possible.  Roumeliotis said he has already had discussions with the wardens of the United Counties of Prescott and Russell and Stormont, Dundas, and Glengarry, and the mayor of Cornwall about the possibility.

The EOHU’s territory is bordered by Ottawa, which was moved to Stage Two one week ago.  The Vaudreuil-Soulanges region to the east in Québec is a red zone under that province’s alert system.

Roumeliotis said on Friday that residents of the EOHU territory should be avoiding all travel outside the region.  He also warned against hockey teams from Ottawa and red zones of Québec where arenas are closed who have been attempting to rent rinks in Eastern Ontario communities.

There were COVID-19 cases at seven schools across the EOHU’s territory as of October 16.  All cases were at schools in Clarence-Rockland and Russell Township.  When there are two or more cases at a school, it constitutes an official outbreak.

Five COVID-19 patients from the EOHU’s jurisdiction were in hospital as of October 16, and one patient was in intensive care.

The number of COVID-19 deaths across the EOHU territory as of October 16 remained unchanged at 12.

As of October 16, 69,560 COVID-19 tests had been performed across the EOHU`s jurisdiction at the six testing centres and by paramedics.

According to the Ontario Ministry of Health, there were 8,904 active cases of COVID-19 across Ontario as of October 15, out of a cumulative 62,908 cases. 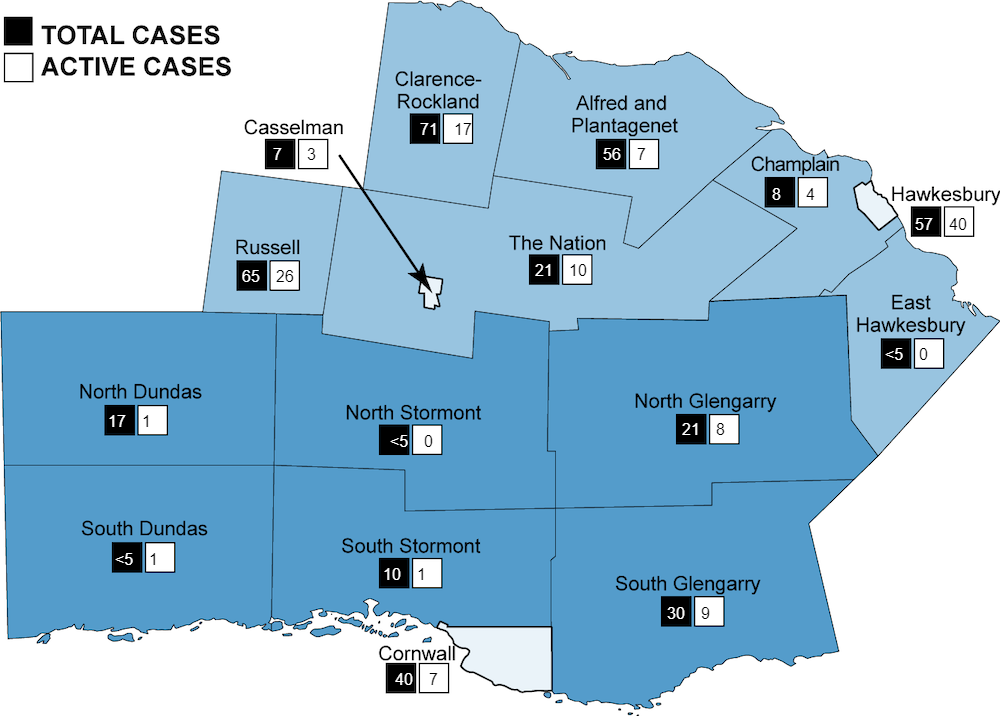