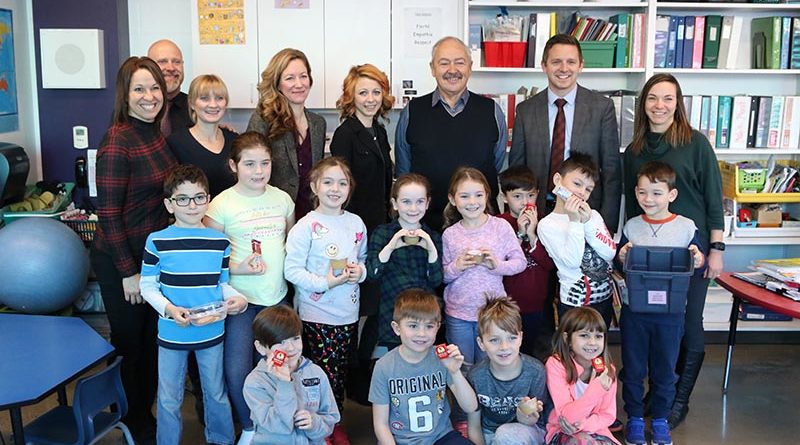 Glengarry-Prescott-Russell MP Francis Drouin (second from the right, standing) was joined by Clarence-Rockland Mayor Guy Desjardins recently in Rockland to check in on a student breakfast program. Photo: Francis Tessier-Burns

How many students eat breakfast at school? The answer is: about 47,000 students in the five counties plus Leeds Grenville and Renfrew County surrounding Ottawa.

Those are spread among 247 programs (including after-school) in 220 different locations. About 70 per cent of the student population eats breakfast at schools in the counties of Stormont, Dundas and Glengarry, and Prescott-Russell (SDGPR) as well as Leeds Grenville and all of Renfrew County. For the five counties (SDGPR), 28,365 students receive breakfast at school.

That works out to 3,825,061 meals served in the 2017-2018 school year. A meal includes both a snack or a morning meal program. A breakfast is considered to be three items served out of the four food groups and a snack is two out of the four items.

There are many factors that contribute to students needing to rely on breakfasts at school, says Jennifer Cuillerier.

Cuillerier is the Student Nutrition Program Regional Manager for Upper Canada Leger Centre for Education & Training, the organization in charge of administering the programs across the five counties. While it is associated to the Upper Canada District School Board, the Leger centre works across all school boards for the nutrition program.

Initially, she says, the programs were focused on students from low-income families. Students had to sign into the program, which meant they were often singled out. Asked if she sees the program as a band-aid on a larger problem, she says, “When I first started, I thought maybe that’s what it was.”

Now, all students have access to the breakfasts and snacks—no signing in, no singling out.

The circumstances surrounding the programs, adds Cuillerier, have also morphed during that time, leading to a more holistic approach.

“When we’re talking about food literacy, preparing meals, encouraging local, all of those other elements, I see it as a life-skill that we’re teaching kids,” she says. “If we were to take all of that away and just concentrate on poverty, I don’t know how that would work without singling out those kids again.”

Cuillerier says the quality of lunches and breakfasts has also gone down over the years.

Time is a major factor: parents are busier than ever, many cut corners in their own diets and that can translate to their children’s eating habits as well.

While the program hasn’t gone directly to parents to discuss the trend, it hopes to get the message across by working with the schools.

While the Leger centre is in charge of allocating funds, schools organize how they run their own program.

Cuillerier recently invited MP Francis Drouin and Clarence-Rockland Mayor Guy Desjardins to visit two of the programs in their area, the one at Rockland District High School (RDHS) and the other at École élémentaire publique Carrefour Jeunesse.

Adult volunteers run the program at Carrefour Jeunesse for the younger kids, while high-risk students in the Community Living Program are in charge of the breakfasts at RDHS.

Sean Burgess is the teacher in charge of the CLP and he says the program is a great way for these students to develop helpful life skills like cooking. The breakfasts range from bagels and cream cheese to grilled cheese to grilled egg sandwiches on english muffins. The students make breakfast twice a week, and according to Burgess they’re cleaned out every time.

Through provincial funding and private partnerships, Cuillerier says that program is in a “good place” overall financially.

Well, with what it is given.

According to Cuillerier, the provincial standard is $1.30 for a breakfast and $0.85 for a snack.

Overall, the program is given $1.37 million a year for food and operating costs from the Ministry of Children and Youth Services. This doesn’t include funding from other partners like United Way Prescott-Russell and the Breakfast Club of Canada, among several others.

The majority of that money goes to the schools for their food. Cuillerier has also developed partnerships with local producers like St-Albert Cheese and apple orchards. Those partnerships, she says, aren’t just a good way to buy in bulk for all schools, they’re also a bit of a safety net.

In the past, the program had partnerships with large organizations and that would often mean putting all its eggs in one basket. If that partnership were to fall through then it would mean nearly starting from scratch. By having a diverse cast of producers, it guarantees some food would be available if another partnership was to end. According to Cuillerier, about 20 per cent of the program’s overall food budget goes towards these kinds of partnerships. The rest goes to schools to buy supplies.

For example, SDGPR gets $463,400 for food, plus any funds raised by local community organizations. The amount each individual school receives is based on various factors like the number of times they serve breakfasts and/or snacks, and how many students actually take advantage of the program. Schools must report their purchases to ensure they’re within budget.

While it doesn’t happen too often, Cuillerier says her team can step in if ever a school isn’t quite meeting the healthy aspect of the program.

In the past, Cuillerier says she likes that the program has kept a relatively low profile. Those who need the program know it’s there and will use it.

While she hasn’t had any official indication that the province would reduce or cut funding to the Student Nutrition Program, past decisions don’t inspire much confidence.

Notably, MPP Amanda Simard was also invited to join the school visits but she was unable to attend.

Following the meeting, The Review asked MP Drouin if funding could come from the federal level to ensure the viability of the program. He essentially deferred to the province, but said, “We’re a G7 country and should find the money.”

Asked about future improvements, Cuillerier says she wants more people to be aware of the program and its overall scope—to know that it’s more than just a band-aid.