Staying on the organic path 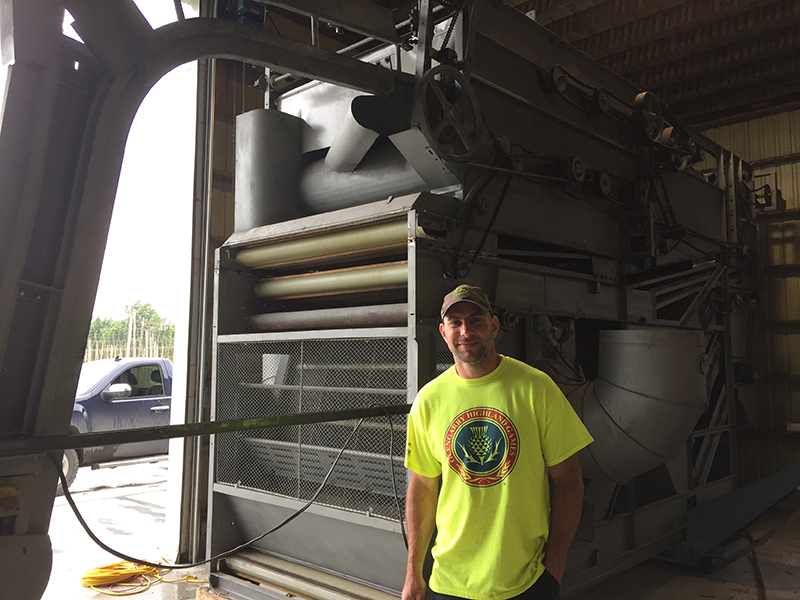 Kent MacSweyn is standing in front of a German-made Wolfe hop harvester This is the first year he has used the equipment in his hop-growing operation.

Organic certification may not be the route for some farmers, but nonetheless, some farmers, like Kurt MacSweyn, are following organic practices as closely as they can.

Kurt MacSweyn is owner and operator of Dalagra Farms near Laggan where he plants 850 acres of beans, corn and hops.
The hop portion of the farm spans 12 acres and was initially intended to be organic, in hopes of shipping to Beau’s All-Natural Brewing Company in Vankleek Hill.

“After our first year, last year, we decided to take another route,” MacSweyn states, even though he purchased all equipment in order to become be organic-certified.

MacSweyn explains that he’s partnered with Wood Brothers Brewery in Glen Robertson and will sell his harvest this year to the company that began operating two years ago. Started by husband and wife team Mark and Natasha Rickerd, the brewery has already made 70 beer batches while awaiting certification.

“It’s a long process with a lot of red tape,” Rickerd says. “It would take much longer if we tried to certify organic.”

Rickerd has been making beer despite the lengthy wait and is perfecting his recipes in the meantime.

When MacSweyn learned that the company wasn’t going organic, he jumped onboard and teamed up with the energetic duo. He explains that Mark is a health-conscious vegan who likes to know where his food comes from. “But when it comes to craft beer, the most important thing is that it tastes good.”

MacSweyn grows a variety of hops and is testing them to see which will do best in the region.

“Mark buys his hops mostly from the United States right now, but will be buying at least 1200 to 2400 pounds from us this year. The more IPA beer he makes, the better it is for us.” He explains that more hops go into IPAs to give them that so called “hoppy” flavor.

“That will be 25 percent of our crop this year, so that’s looking good.”

MacSweyn credits his family, friends and employees who worked hard stringing the organic coconut coir (rope that hop vines grow on), training the plants to grow up the ropes, and steaming the weeds in order to keep it as organic as possible. “I bought the equipment, so we might as well use it. Besides, we want to use as little chemicals as possible.”

He explains that the clover and rye grass flourished this year with such good weather, so weeding by hand was a bit difficult. He expects next year to be a whole lot better, especially as the system improves. He looks forward to testing out his harvester, grinder and pelletizer this fall.
With all the equipment purchased, MacSweyn hopes to offer hop drying and pelletizing to other growers in the area. He says there are still several hop growers in the area who sometimes travel quite a way to turn their hops to pellets, the preferred type in the craft beer industry.
MacSweyn also encourages people to learn about his farming practices and along with Wood Brothers Brewery, will host events and tours at both locations.

“Customers like to see how hops are grown, how the beer is made and what our story is. That’s a big reason why we don’t have to get certified as organic.”