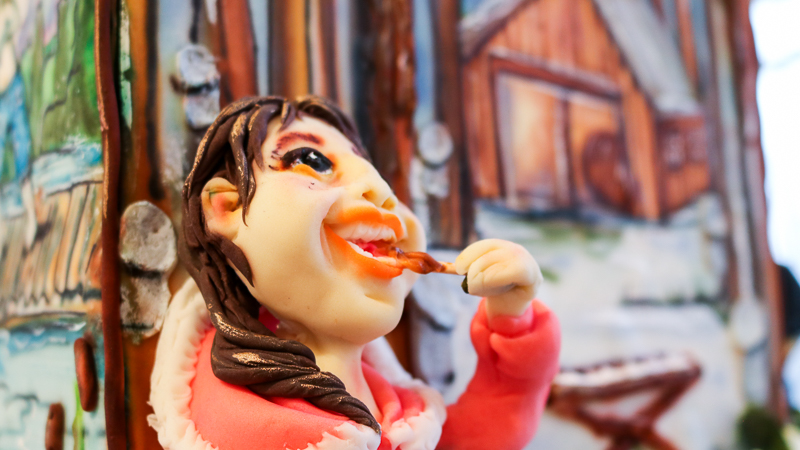 This scene was part of Jody Beaudry’s Joy of being Canadian decorative cake, which was on display at Arbor Gallery for CAPRAC’s 150 Reasons to be Canadian exhibit. (Photo: Francis Tessier-Burns).

Just over six months ago, the United Counties of Prescott and Russell (UCPR) was debating absorbing the arts council it created less than five years ago. Now, the Conseil des arts Prescott Russell Arts Council (CAPRAC) has seen its budget nearly double to $100,000—the original figure it was founded upon in 2014.

In its 2018 budget, the UCPR had initially approved $58,300 to go towards the organization, following its original plan of phasing out the funding over the years.

But Shanna Steals, CAPRAC’s executive director, says those cuts “would no longer be adequate” for what the organization was hoping to pursue in the future.

One hiccup the cuts created, she says, is the inability to apply for certain grants due to its operating budget being too small.

“We need have core funding so we can put that as leverage,” says Steals.

Éric Charlebois, who sits on CAPRAC’s board of directors, adds that had the UCPR absorbed the organization, it would have disqualified itself from many other grants that are unavailable to municipalities.

The money will be going to the organization’s newly established priorities, which include professional development for emerging artists and raising general awareness of the local arts among others.

That $100,000 isn’t a one-time thing; it’ll be recurring funding for the the next five years, which Steals says will allow for better long-term planning.

While according to Charlebois there aren’t any specific goals for the organization to hit, the UCPR is “asking for us to show them in a clearer way… how the arts are actually a catalyst for a lot of businesses.” He calls the move “logical” and adds, “honestly, it’s about time they require it.”