No injuries in Dalkeith fire 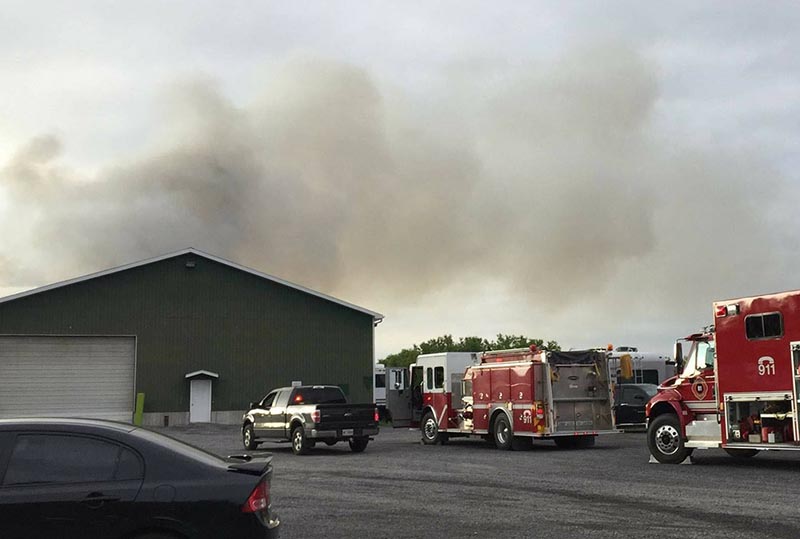 A fire that broke out Thursday afternoon in a vacated Dalkeith building brought fire trucks from South Glengarry, Alexandria, Maxville and Vankleek Hill to the rescue. Paramedics were in short supply due to the strike, but as there was no one injured at the scene, there was no added emergency.
Bruce Brock, owner of the former sawmill and of Carter Shows, a carnival company, says that the fire was quickly contained and no other building or equipment was affected.
“Smoke damage seems to be the only concern now,” explains Brock. “The cause of the fire is still under investigation, but none of the equipment seems to have been damaged.” The facility where the fire started has been demolished..
For the time being, two companies are working side by side on the property: Carter Shows on one side, and modular farm construction on the other. But soon the property will be taken over by Alexandria-based company Modular Farms Inc.
Brock says he and his carnival staff of about 20 to 30 people, as well as his daughter Victoria and French Pug, Stella, will be disappointed to leave Dalkeith. As the fourth largest carnival company in Ontario, Brock is sure that the show will go on, but unfortunately, Dalkeith will not be on the fair map.
“We’ll really miss it here, especially the convenience store in Ste-Anne-de-Prescott. We all shopped there.” Brock will be moving his rides to the company’s other location in Bothwell, Ontario upon the sale.
Brock hopes to ride out the summer carnival season in the area, attending Eastern Ontario fairs, with the South Mountain Fair and the Lebanese Church Festival being next on the list, as well as setting up for some private and charity events.
“We’ll ride it out,” says Brock. “But we’ll sure miss Dalkeith.”