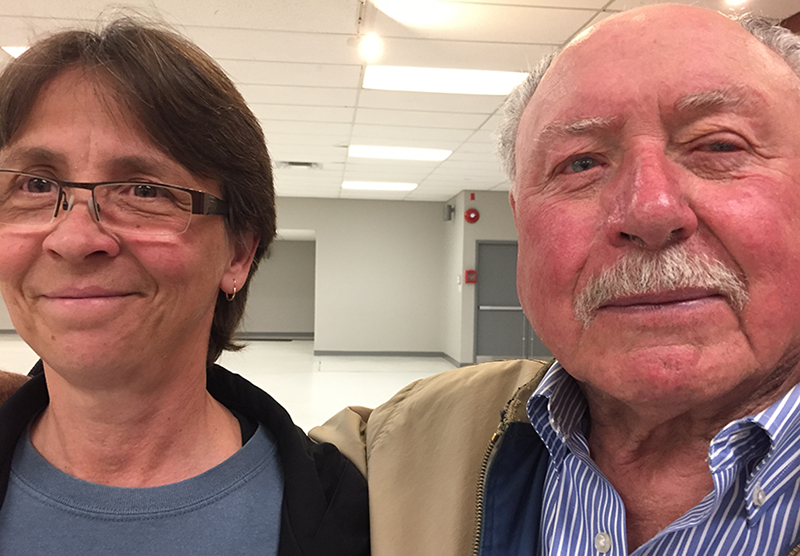 Spontaneous hugs from strangers are not uncommon for local resident Bob Pearson, otherwise known as the Gimli Glider pilot who miraculously landed a 61-passenger Boeing 767 without fuel July 23, 1983 in Manitoba.

One of those passengers is Elizabeth Sapena, who resides in Alexandria. Sapena had boarded the plane in Montreal that was destined for Edmonton.

Sapena talks about the world-renowned incident that’s been described in hundreds of stories, a movie and a book.

“When the plane started to shake a bit, I thought it was just a bit of turbulence.”

Sapena saw Pearson at the Billy Gebbie Arena in Alexandria on May 22 and re-introduced herself as one of many grateful flight survivors… but only after giving him a great big hug.

“I didn’t know who she was,” Pearson states during his two-hour talk to close to 50 people who attended the event. (The event had originally been scheduled to take place a the library, but was re-located to the arena by librarian Sylvie Juteau because it was promised to be so well-attended)

“I’m always happy to see people so grateful that we managed to land and get everyone to safety,” Pearson says.

Sapena sits in the front row and listens intently as Pearson describes the flight, the conditions at the time and aftermath of the life-altering experience for passengers, crew and particularly late crew member Maurice Quintal, whose son afterwards was left disabled after a bad accident and whose wife committed suicide.

“Two factors were crucial at the time,” explains the 82-year-old Glen Robertson retiree.

“It was the conversion of the imperial system to metric (gallons to litres) and the fact that we had to try and be as automated as possible.”

He explains that he was one of the first pilots to fly after the airlines converted to the new metric system and that most training before that dated back as far as World War II. Economy was key. (Pearson says he has trained in many places, including Hawkesbury, where he learned to land a plane with just one wheel – on a handkerchief.)

But back to the history-making flight.

“I requested enough fuel to go to Edmonton so we wouldn’t have to refuel in Ottawa,” states Pearson of the pre-flight preparations.

“We had quite a long discussion about it and did several drip tests to make sure we were good to go; enough fuel to get to Vancouver I was told.”

When the low-pressure light came on, Pearson thought there was no big problem. But when other lights came on, they knew there was something going on.

“We’re trained to trust our instruments, so that’s what we did.”

Sapena recalls the message from Pearson in the cockpit, saying there would be a delay.

Then everything went black. There were no lights, there was no engine sound. It was unnaturally quiet on the plane.

Only 30 miles from Winnipeg and 14 to Gimli, Quintal remembered the air base training sight in Gimli and suggested they try to land there.

“The crew was madly going through flight manuals to find any information on emergency landings. We found nothing.”

Pearson explains how he used the fuselage as a brake 800 feet from the runway and that he could see lots of cars at the end of the lane and two boys on bicycles (there were three, but he only saw the duo), and knew he had to stop. There was so much smoke, Pearson told crew to get everyone out of the plane.

Pearson was put up in a hotel and greeted newspaper reporters the next day in his boxers. “Well, this isn’t a pretty picture,” he said. “Don’t turn on the tape recorders yet.”

There have been many inquiries, a lot of finger-pointing, heartache and interesting revelations since then. Though a book (Free Fall) and movie have long since been released, another movie is in the works that Pearson and his partner Pearl (who was a passenger on the flight) know about. They have reviewed the 11-page proposal sent to them by the director from Los Angeles, but are not certain on the release date.

“I’m looking forward to it,” says Sapena, who drives a school bus in Alexandria.

“It was quite an amazing experience.”