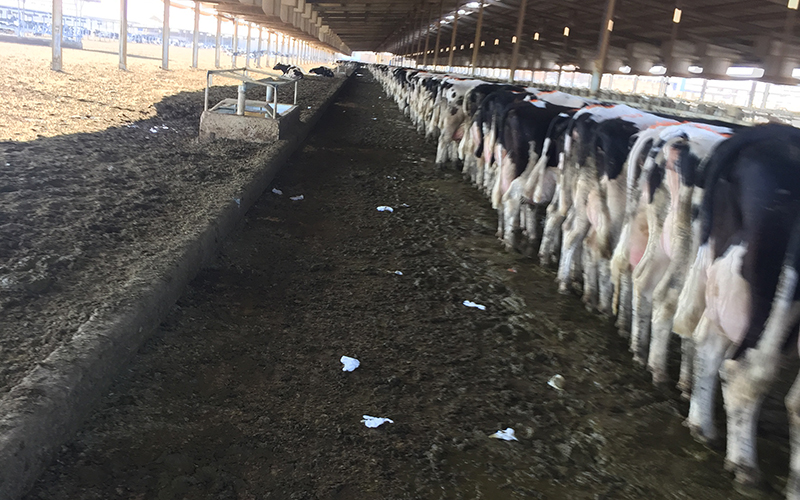 It’s hard to believe that Canadian Holstein semen would be sought after in the Middle East, and even in Saudi Arabia, where temperatures can soar to over 50 degrees centigrade.

Canadian cows don’t have to deal with that type of climate, so one would think the bull semen would not produce calves conducive to the extremely hot temperatures.

“The cows in Saudi Arabia are very well looked after and have protection from the desert heat,” explains Craig LeRoy, East-Gen dairy solutions specialist from St-Eugene who recently visited milking farms in Saudi Arabia to exchange ideas on dairy production. While promoting sales of Semex semen as well as offering and taking advice on better dairy management, LeRoy said he was impressed with the 40,000-milking-cow herd that comprises the 80,000-head farm.

“Their operations are very clean, well organized and developed so cows can be inseminated easily with our semen.” LeRoy states that there are no bulls on the farms and all pregnancies occur artificially. “It’s our goal to partner with them so that we can supply the Middle East dairy industry with the best semen available.”

Though Semex didn’t get the contract this year to supply any of the farms, the company has done so in the past.

Visiting the mostly Muslim country that is home to Islam’s holiest city was quite an experience for LeRoy, who grew up milking cows on the family dairy farm and showed horses with his father, Jeff.

“It’s a fascinating place and I was very well looked after,” says LeRoy, who bunked down on the farm in the visitor’s quarters.

Another part of the farm includes living space for more than 700 Indian and Pakistani workers employed by the farm to milk, feed and clean. Workers are hired for about $300 Canadian per month, including room and board.

“They send the money home to their families in India, Pakistan and the Philippines,” says Dr. Bryn Holmes, who teaches at the American University of Raz Al Khaima. “It doesn’t sound like a lot of money, but back home, it’s a fortune.” The workers get 30 days off a year and go back to their home country to spend time with family.

LeRoy was impressed that their dairy industry was so lucrative.

“There’s no way to grow crops or hay, and water is very hard to come by. Now everything must be imported, including labor.”

All hay, mostly alfalfa, minerals and supplements are imported from the United States. Water that was once extracted from the ground now has to be imported as well. LeRoy understands that the extraction of water that rests above the oil was disturbing the ground and making it difficult for oil companies to harvest.

“The only thing that helps Saudi Arabia stay in the dairy industry, producing milk, cheese and yogurt, is the fact that it has cheap labor. Every other input is very costly.”

Dairy product prices are not that different than those in Canada. A Saudi Arabian Riya is worth about three Canadian dollars as is many of the UAE (United Arab Emirate) countries. One litre of milk is worth about six riyas or dirhams, making milk 20 per cent cheaper than the cost at Independent Grocer’s in Alexandria. Because the dairy industry continues to improve in Saudi Arabia, sheiks and investors are buying land in North America where they will be able to grow their alfalfa to import. Arizona and California are prime targets for the production of hay to export with thousands of acres already owned by the Saudis.

LeRoy was pleased with the experience to visit Saudi Arabia and looks forward to a return visit where he can promote Canadian Holstein semen.