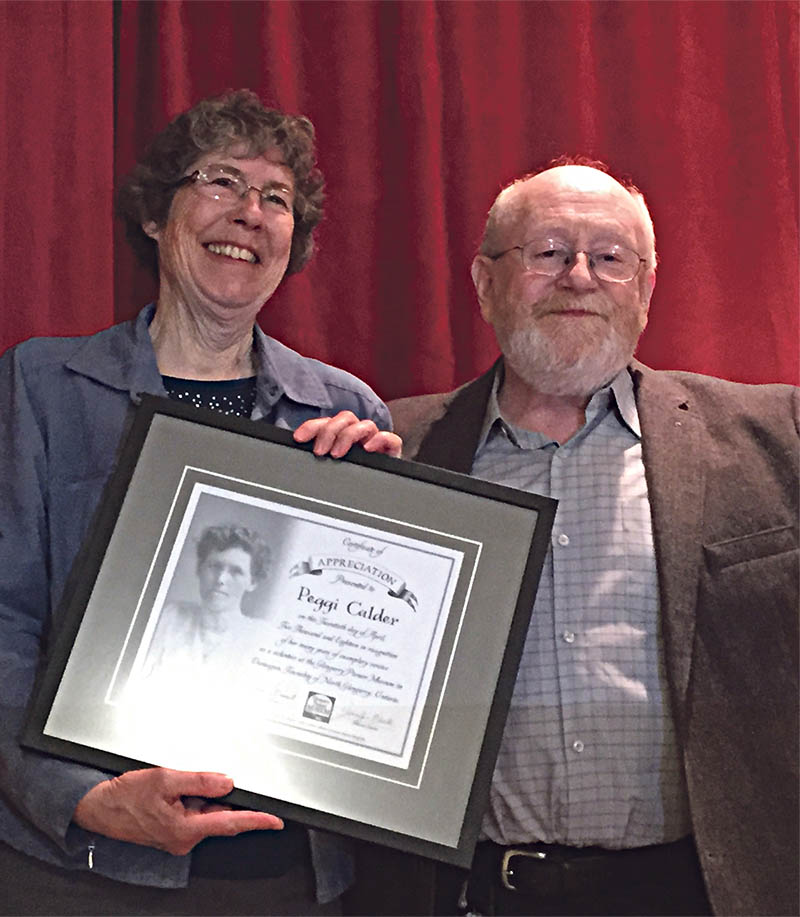 Community involvement is just what you do when you live in Dunvegan. Peggi Calder is one of those people who was recently recognized as the Glengarry Pioneer Museum (GPM) volunteer of the year. The museum’s annual general meeting was held April 20 at the Dunvegan Community Center and two awards were presented to those dedicated to help and promote the museum and the history of Glengarry.

“Peggi is not a one-trick pony, either,” says James Joyce, who presented Calder with the certificate of appreciation. “She’s worked with the Women’s Institute, on the North Glengarry trails, helped out during the ice storm, been a columnist, DRA fundraiser, author of Wild Edibles, helped infamous pie maker Flora Chisholm and been on the museum’s board of directors.”

According to Calder, one of her greatest achievements was her involvement to move the Angus McRae Trapper’s Cabin to the museum. “It was about preserving history and also about Angus and his stories,” explains Calder. “I loved talking with Angus about hunting rabbits. It was a trip down memory lane for me. I think of the trapper’s cabin as my own.”

Calder explains that her parents were very involved in history.

“They got me started,” She moved to Dunvegan to raise animals instead of going to the Maritimes where she almost bought a hotel.

Robert MacDonald presented Douglas Irvine of Dalkeith with the Pioneer of the Year award, remembering Douglas, his brother Stewart and his late sister Dorothy. MacDonald explained to the full-house crowd who enjoyed a potluck feast typical of the GPM’s annual general meeting, that Duncan and Elizabeth Irvine started farming in Dalkeith in1859. Douglas inherited the farm from his parents, Ian Irvine and Sara MacLeod, around 1950, upon graduating from Kemptville College. 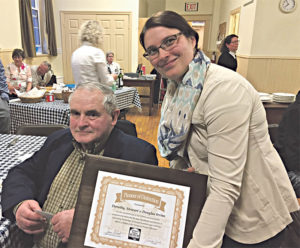 “Over the years, they’ve been awarded for being in the Holstein industry for over 100 years, for their soil and crop contributions and for their dedication in the farming industry. “The family has deep agricultural connections to Glengarry,” states MacDonald. “And it doesn’t stop there.”

MacDonald explains that Douglas’s local history knowledge is paramount. Dorothy’s work as building inspector for North Glengarry and as an artist extraordinaire (her works are displayed at Dalkeith Plus) is much appreciated by many. She was involved in numerous volunteering jobs including looking after the museum gardens and helping museum curator Jennifer Black with research material. Stewart’s passion for Civil War reenactments, cannon ammunition and contribution to the Grays and Blues at the Lost Villages as well as his membership in the Dalkeith Historical Society and GPM. Their dedication and contributions are much appreciated and recognized by the Glengarry Pioneer Museum.