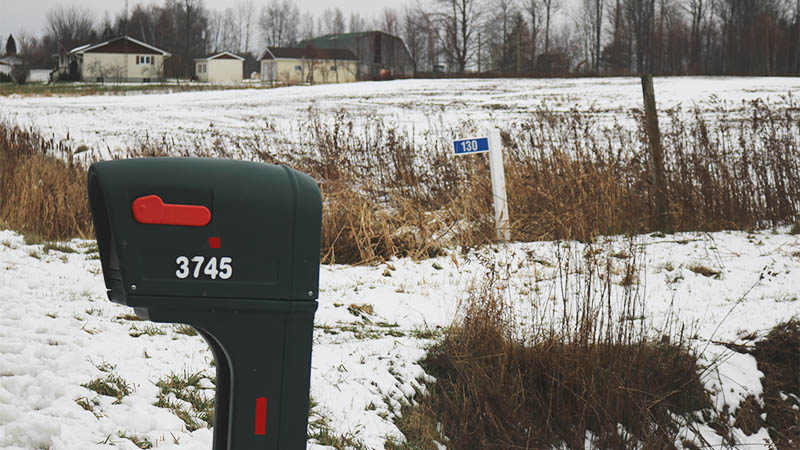 The two addresses above are actually facing each other near the transition from Champlain to East Hawkesbury on Pattee Road. (Photo: Francis Tessier-Burns).

It’s a dark, snowy evening. You’re driving alone down County Road 10 when you see a car with its nose in the ditch and a bloodied deer lying nearby. Nobody else is on the scene. You stop and step out of your car to check on the driver. The person is motionless and doesn’t respond to your calls, but you see their breath in the cool air. You dial 911 and survey your surroundings, but the snow prevents you from noticing any landmarks other than fields. How do you explain where you are?

While Farm 911: The Emily Project wasn’t created to address this type of situation, it certainly could help. Its website says, “We believe all rural properties should be properly addressed.” That includes farmers’ fields with multiple entrances; each one would have its own civic address.

At its Committee of the Whole meeting in early November, the United Counties of Prescott and Russell mulled over the possibility of having municipalities install addresses to all rural entrances. Overall, council favoured the idea and recognized its safety implications. However, the distribution of civic addresses is the responsibility of lower-tier municipalities and not the Counties.

During the meeting, Michel Chrétien said he’d work with representatives in each municipality to get feedback about the project.

According to Guylain Laflèche, planner for The Nation, there are already some farmers that request a civic address for their fields. It costs about $90 for the sign.

To Laflèche this isn’t a new idea, when he started as a junior planner in the area more than 15 years ago, people were already talking about it.

Alison Collard is the clerk for the Township of Champlain.

“On occasion, we have issued civic numbers at the request and cost of the property owner when there is some on-going activity, i.e. land with farm buildings and no residence,” she wrote in an email. The cost in Champlain is steeper at $200.

The cost of installing civic addresses can climb quickly when you consider many farmers have multiple fields, often each with multiple entrances.

But installing address signs is only one piece of the puzzle to ensuring first responders locate emergencies.

It’s no surprise that right now a municipality has its own address system, which doesn’t necessarily mesh with its neighbour’s.

Louis Rathier is the deputy chief of emergency services for Prescott-Russell. He says he gets feedback of inconsistent addressing all over the Counties.

A good example is Pattee Road. As you turn onto the road from Highway 34, addresses begin around 1000 and go in descending order. However, not long after turning you’ll notice numbers on the right are in the 900s, while on the left they are in the 700s, both in descending order. The same thing happens further down the road with 300s on one side and 100s facing them. According to Champlain township this is because addresses are following concession numbers and lots rather than a simply following numerical value.

The transition between Champlain and East Hawkesbury is also confusing since it isn’t a straight line dividing the two municipalities. For about 100 meters there are addresses in the high 3000s on the left and low hundreds on the right. Once you cross over to East Hawkesbury, addresses on both sides jump to the high 3000s and go in descending order. Although there’s still the problem of numerical values not following consistently on either side of the road.

In another example, there are two homes with the address of 1875 County Road 10. They’re 16 kilometres apart—one just to the west of Vankleek Hill, the other to the east as you enter East Hawkesbury.

Realistically, Rathier says people are either from the area or know it well enough to be able to give clues as to where they are. Nonetheless, it could still cause confusion for visitors or in extreme circumstances.

Three years ago, a working group made up of various municipal stakeholders, including emergency services, identified these types of problems and established the 911 Protocol. Essentially the document outlines how municipalities should change street names, expand roads and issue addresses with tips like avoiding similar sounding names, not introducing “unnecessary gaps” between addresses and keeping street names short with no odd punctuation, among a long list of standards.

“We created this protocol so problems aren’t repeated,” says Rathier.

But the protocol doesn’t address the current issues of confusing addresses. That’s the next—and most difficult—step.

It’s important to note that in the vast majority of cases first responders have no issue finding the emergency.

“Can we, in principle, be more effective and lower the probability of errors? Absolutely,” says Rathier.

And that can be achieved with a regionally standardized address system that covers all of the UCPR. That’s the working group’s next goal—though it’s still in the early stages.

Again an example: addresses along Highway 17 are in descending order from east to west no matter which municipality you’re driving through.

That way “the address gives you a good idea where it is on the map,” says Rathier. “It avoids problems, is more efficient and minimizes risk.”

Ideally a similar system would be adopted Counties-wide. But that would likely mean changes to street names and addresses in every municipality—a feat that wouldn’t come easy or cheap.

Not only that, it would affect residents as well. Think of all the mail you receive or services that require your address. (Although maybe losing a few bills along the way wouldn’t be too bad).

Finally, the system really only works if every municipality signs on to make the change, otherwise it breaks down.

“Our intention isn’t to push municipalities to do it,” says Rathier. “We just want to show where the problems are and potential solutions.”

Is it worth it? That is for the elected officials to decide.

Adding civic addresses to field entrances could be the first step in solving address issues in Prescott-Russell. At the very least, it’s a little nudge to help facilitate the job of first responders.

And if change is to happen, hopefully it won’t take a tragedy like what happened to Emily.