Competing services, low enrollment cause 100% Actifs to shutter after 11 years 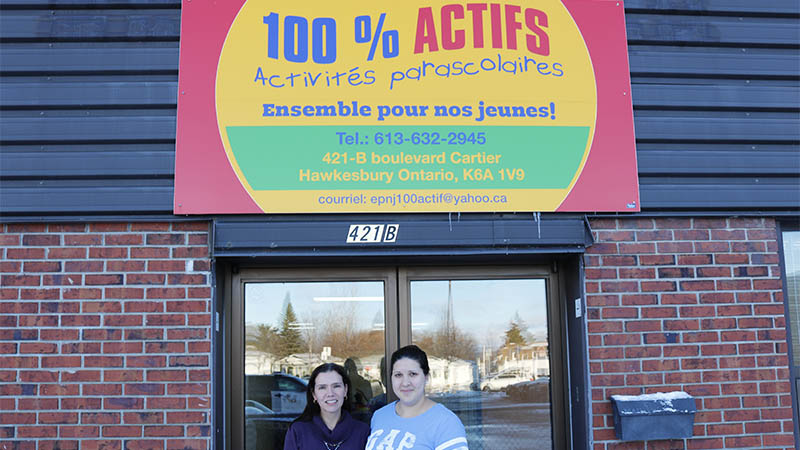 “It’s like we were driving down a one-way street with nowhere to turn. At some point, we were going to hit that dead end and I guess we hit it.”

That’s how Sue Poulin-Baril described the process leading up to the closure of 100% Actifs. The not-for-profit organization, which offered after-school programs in local elementary schools, decided to shutter in early October.

Poulin-Baril, the organization’s treasurer and volunteer, adds it did look for a few exits before hitting that dead end.

“The volunteers have invested a lot of time and energy to keep this organization afloat,” she says.

In a letter it sent to the three townships which it served, 100% Actifs said it closed due to “unforeseen challenges” that left the organization in a “very precarious situation.” And, “most importantly the decision of the Boards of Education to offer their own daycare and after school (sic) programs to the same clientele has most definitely added to our demise.”

Poulin-Baril says all seven schools it serviced have introduced some sort of after-school program.

That has led to fewer enrollments, especially in the younger age category. The organization’s services were geared towards children ages seven to 12.

“The seven-year-olds are the start of 100% Actifs and generally the highest enrollment,” she says.

The letter said its services would no longer be needed at École élémentaire catholique Saint-Jean-Baptiste in L’Orignal since the school board would be offering new after-school programming and it would essentially be doubling services.

“That was hard to swallow,” says Poulin-Baril.

Kayla Léveillée Quan, activity coordinator for 100% Actifs, said some of the other schools already had after-school programs and there were no issues since in the majority of cases it only had programming twice a week.

“In our minds, we didn’t double the service because we weren’t there five days a week and we didn’t offer the same service at the same number of hours,” says Léveillé Quan. But according to her interpretation of the letter, the conflict came from services offered to the same age group—often those seven-year-olds—and not in the actual services themselves.

The Review contacted CSDCEO asking how the new services at St-Jean-Baptiste were different, why it decided to take the responsibility of offering programming instead of working with 100% Actifs and if kids could be enrolled in both services, but had not received an answer.

Poulin-Baril says the province’s Ministry of Tourism, Culture and Sport was the organization’s biggest financial supporter. While she says it helped by trying to brainstorm new strategies to staying open, it ultimately cut funding significantly since 100% Actifs was unable to meet its criteria: 30 kids in each of the seven schools and offering nine hours of programming per week in three-hour long sessions.

The only school that allowed them to do so was École élémentaire catholique Paul VI in Hawkesbury since its school days finished at 2:30 p.m. The organization would then run its program from 2:30 to 5:30 p.m.

Other schools finished later.While it thought about expanding, the organization decided against it so not to interfere with parents picking up their kids.

Another problem was the incoming minimum wage hike.

“We did a lot of number-crunching there and we would have had to have 22 kids in every school just to make ends meet,” says Poulin-Baril, something that never happened in its 11-year history in any school aside from Paul VI. Filling the animator positions was also a challenge.

It cost parents $20 per month for kids at Paul VI enrolled in its program, which was held three days per week last year. In other schools, where services were only twice a week, it cost parents $10 per month.

“If you’re a parent and you need your kid to be in daycare the whole week and our program only allowed us to be in the school two days, parents need to put them in the daycare,” she says.

Following the letter from CSDCEO, realizing its tumbling enrollment numbers and receiving less funding, the organization decided to stall its programming at the start of the school year in all schools except Paul VI.

But to no avail.

It took two board meetings before finally deciding on October 3 that 100% Actifs would be closing its doors.

Now the office at 421 Cartier Boulevard sits empty, except for equipment and cabinets with the names of the recipients on them.

“Reality has set in now when you see it empty,” says Poulin-Baril.

But the three board members take comfort in knowing the equipment has gone to “appreciative hands.”

“We know there will be kids that will be given an opportunity because of what we’ve been able to give,” says Poulin-Baril.

Though the story may not be totally over. Someone has apparently contacted the organization for a meeting, though the board doesn’t know who or for what reason.

“We would like to see someone else step up,” says Poulin-Baril. “It’ll require a new team to take over and change the mandate with their vision. We just wants what’s best for the kids.”