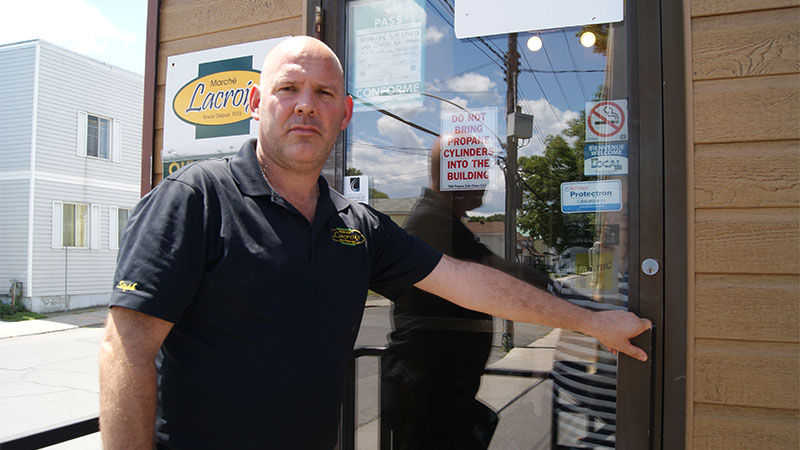 Stéphane Jeaurond has owned Marché Lacroix since 2000. Interest on a six-year-old water bill has him thinking of selling. (Photo: Francis Tessier-Burns).

Interest on a six-year old water bill has Stéphane Jeaurond wondering if he should sell his business.

In 2010, Hawkesbury introduced water meters in residences and businesses in preparation of a new water treatment plant. Jeaurond says the meters would show consumption, but not the cost associated to that consumption.

During that time, Marché Lacroix was being refrigerated by 13 compressors, which were cooled by water.

“I know I was wasting a lot of water,” says Jeaurond.

Halfway through 2011, to try and save on water, Jeaurond spent about $130,000 to revamp his cooling system to 12 new compressors in a separate fan-cooled room.

Realistically, Hawkesbury knew there would be a severe increase in commercial water bills.

In 2012, the town passed a by-law that allowed businesses to sign a contract which would allow businesses to pay the 2011 water and sewer user fees interest-free over a three-year period, as long as businesses “show they made quantitative efforts to reduce their consumption of drinking water.”

When Jeaurond went to sign the contract, he took issue with the fact he would have to pay 36 equal payments in those three years instead of paying when he wanted.

The original by-law passed by council did not specify it had to be 36 payments, only that it was three years interest-free.

Jeaurond did not end up signing the contract.

Jeanne Charlebois says she isn’t aware of all the details of the agreement since it was before she was appointed mayor.

“He was offered a deal by the former council and he didn’t take it,” she says.
At the time, two other businesses did sign the contract and paid off their water bills.

Fast forward a few years, early December 2016, Jeaurond went to town hall to pay his water bill in one lump sum—not including the interest.

“He showed up with a cheque less the interest,” says Charlebois, “and the treasurer said we cannot cancel the interest, so we have to go to council.”

Jeaurond says he wasn’t notified in any official capacity that his case was going to be discussed at council. The only way he found out was when one of the councillors, Daniel Lalonde, texted him saying he was on the agenda of the televised meeting.

In May, Jeaurond sent out a letter to all the members of council, Glengarry-Prescott-Russell MPP Grant Crack and MP Francis Drouin, asking for the interest on his water taxes be cancelled.

He says he only got a response from Crack, which said it was a municipal affair.

During the June meeting’s question period, Jeaurond asked why no one had responded to his letter.

“It’s been many times you’ve presented your case before committees and before council,” said Thibodeau.

However, this is something Jeaurond disputed during our interview. He says when he and another business owner asked to meet with a committee specifically for water taxes late last year, they were told it wasn’t worth it since they would have to go to regular council anyway.

Thibodeau continued, saying he did receive the letter but was waiting to discuss it with the General Government Services Committee.

Somewhere along the way, that did happen because council was presented with a recommendation from that exact committee, which said not to agree to Jeaurond’s request of waiving the interest fees.

Paquette, for his part, said he didn’t respond to the letter because he visited Marché Lacroix as a patron and had a half-hour long discussion with Jeaurond on the matter.

In our interview, Jeaurond says that when Paquette dropped by the business, he was soliciting donations for the town’s golf tournament.

“We’d be setting a precedent if we do this,” says Charlebois.

Jeaurond has already cut operating hours and staff to try and save.

He says he’s meeting with the bank to see what his options are.

“If I pay all of this, my cash flow is totally gone,” he says.

There’s also the fact that since it’s been more than three years the water taxes haven’t been paid, they’re put towards the business’s property tax bill.

That’s how the town could force him to sell to finally collect the $50,000 in arrears.

Exasperated and fed up, Jeaurond says he remains in limbo and isn’t sure what he wants to do. He’s thought of downsizing, or even selling. Now, at age 46, he’d like to slowly start taking a step back.
But he says he absolutely loves his job.

When it comes to the issue with council, he says, “I’m not asking for the red carpet treatment. I just want them to be more understanding.”