A short, dusty drive along a pockmarked Wylie Road in Glen Robertson brings you to White Pine Lumber.

Farnum steps out to meet me and I’m whisked away on a tour. She has short grey hair with thick-rimmed black glasses, faded jeans and a dark grey t-shirt that reads Brooklyn Brewery.

Our first stop is what looks like an extension to the workshop.

There’s a table and stools in the middle of the space. On the wall to the left is a square sign that looks like it was stamped with “Wood Brothers Brewing Co.” Lamps cut out of old metal milk jugs hang overhead—a subtle reminder it had once been a milk house. To the right, brewmaster Carl Delorme is storing three sixth-barrel kegs into a repurposed chest freezer that’s been outfitted with a trio of tiny tap handles.

“This is going to be the tasting room,” says Farnum.

We step around the table into the actual brewery, Goulet is hunched over a deep stainless steel sink cleaning glass carboys. Later in the tour he says brewing is nine parts cleaning and one part actually making beer.

Farnum leads me out and around the storage to a patch of grass delimited by four stakes.

“This is where we’re going to build a pergola,” she says. “And then we want to have string running up and over so we can grow hops.” They hope to host events like beer and food pairing parties, some live music, maybe even some art shows.

But none of that can happen until Wood Brothers is properly licensed. 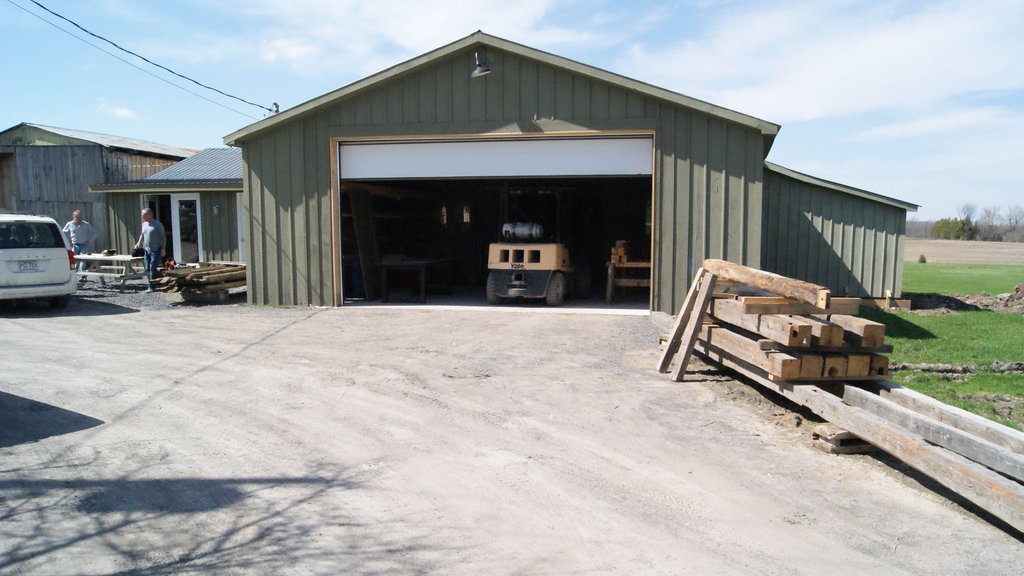 “If it takes all summer, that’s what it’s going to take,” says Farnum. She adds, it’s been about a month since they started the licensing process. Last we spoke, she said, “We are majorly waiting on license… Township delay.” After all, this is uncharted territory for North Glengarry.

Paperwork-related hiccups are nothing new for the four owners. While the brewery is their newest venture, they’ve all been business owners for most of their professional lives: Rickerd and Boucher have White Pine Lumber, Farnum co-owns 2 Barn Owls in Hudson and Goulet has his own electrical business.

That experience plays to their advantage, according to Farnum. “When you’re young, sometimes you flounder. Now we’re old enough to know what’s a smart step.” And it helps that they haven’t incurred any debt yet, despite a $50,000 price tag attached to the work and equipment so far.

After a chance meeting in December at Brasserie du Bois Blanc in Hudson, the four hopped onto the idea of having their own brewery. Barely a month later, the milk house had already started being transformed.

While Rickerd and Boucher had been flirting with the idea for a year or so, they had never actually taken the fizzy plunge into trying their hand at homebrewing.

Delorme was already working for Rickerd, and when he learned that his employee had been brewing at home for about three years, it was a natural fit. That’s also where the name comes from. “They’re like brothers,” says Farnum of Rickerd and Delorme.

They self-gifted the brewing equipment for Christmas last year. Since then they’ve experimented with eight different recipes with two getting the OK to be in regular rotation. The plan is to have four core beers and mix it up with a few seasonals. Boucher says the majority will be hop-heavy India Pale Ale-style.

“We want to bring Vermont here,” says Boucher. She and Rickerd vacation there often and tour breweries like The Alchemist, Fiddlehead Brewing Company and Lawson’s Finest Liquids.

“They’re more organic, farm-based, everything is more natural,” says Rickerd. And that’s not just when it comes to the style of beer. “They also have small venues for outdoor concerts and a timber frame… Because everyone is vacationing down there to see these things, so we’re trying to take a small chunk of what people like for beer, what they like for events and bring it up here,” he says. “That’s the one thing, no one has really done here yet.”

The crowd will be clad in birkenstocks and plaid shirts with “lots of armpit hair,” jokes Rickerd. “And toe hair!” laughs Farnum. This type of relaxed exchange showcases the group’s overall hakuna-matata attitude towards the project.

There is one potential issue other than waiting on licensing.

“Everybody that we talked to that has a brewery, they all say ‘We started too small, we should have started bigger.’ So I’m hoping a year from now, we’re not going to be saying that, but I think for now it’s good,” says Boucher.

Rickerd calls the brewery a “pioneer” that “built the demand.” Now, he says there’s space for “the next generation of beers that are smaller with more ingredients, more hops, where some of the bigger guys have a hard time now making some of the specialty recipes.” And competition isn’t an issue. “The way this market is expanding, it doesn’t matter if there was 20 more,” he says. “The younger generation is drinking less and less mass-produced beers, so as they’re getting older, the market just gets bigger and bigger.”

Every label is stamped by hand. (All photos: Francis Tessier-Burns).

An old chest freezer holds their kegs for now.

Acording to the Ontario Craft Brewers association, in 2015 craft beer sales in Ontario totalled about $240 million. The LCBO’s annual report for 2015-2016 says craft beer sales went up 36 per cent when compared to the previous year. That growth also makes for more jobs. Craft breweries account for about 1,500 jobs, about one-third of all brewing-related jobs in the province.

But for Wood Brothers it’s all about the experience.

“It’s as much about the adventure. The getting there is great, but it’s about enjoying every step of it… We’re going to be fluent with it,” says Farnum. Though one thing will never change, “we definitely want to make a really good, quality beer.”